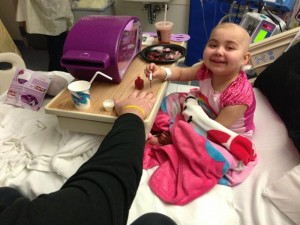 Peyton feeling good enough to paint nails in the hospital.

Meet Peyton. She is a Hodgkin’s Lymphoma survivor and my Team in Training hero. Members of TNT choose to run, swim, and/or bike in honor of those who have been diagnosed with leukemia or lymphoma. These heroes inspire us to do our best and serve as a constant reminder of why we are running, biking, and/or swimming so much. Each chapter of Team in Training has an honored hero, and individual members often select someone they know to be their hero. In fact, that’s how I heard about Team in Training—a few years back a friend from high school asked me if I could be her TNT hero for a season (it was an honor).

I first heard about Peyton nearly two years ago, when she was three years old, through a friend at work who asked us to pray for her. Being a leukemia survivor, I know that I owe a lot of people a lot of prayers, so our family decided to pray regularly for Peyton. This little girl had been diagnosed with dilated cardiomyopathy at 17 months and received a heart transplant in October 2009. Her “Inspired by Peyton” facebook page explains what happened next:

In August of 2011 Peyton became very ill again. She was showing symptoms of several different types of possible illnesses. The doctors at Cincinnati Children’s tested her for meningitis, bone cancer and several other things. Peyton was put through the ringer for several weeks. The diagnosis given was finally PTLD (Post-transplant lymphoproliferative disorders).

For nearly two more years Peyton would continually be in and out of the hospital. Her new condition required her to undergo multiple rounds of chemotherapy while dropping the anti-rejection medication for her heart. She responded well to the chemo, but then her body started to reject her heart. When they upped her anti-rejection meds, the cancer returned. This see-saw battle between the lymphoma and heart rejection went on until very recently. Throughout it all, this little girl was extremely sick and constantly fighting for her life. 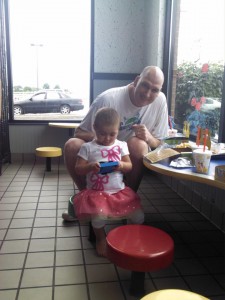 Peyton was more concerned about playing than meeting me. Smart kid!

I had the privilege of meeting Peyton twice. Last year I was sitting at a local restaurant with my family when Peyton walked past me. I instantly recognized her as the girl we had been praying for. I was able to talk to her mom for a while and get a picture taken with Peyton. A little while later, I saw her at a rummage sale fundraiser for her family. She was in a good mood that day and played some hide-and-seek with me.

Last month, on April 22, Peyton was finally declared cancer free! She has gone through multiple surgeries, hospital stays, and rounds of chemotherapy. Even after being declared cancer free, she has faced some trials. She developed an infection in her central line (PICC). Her family’s apartment had flooded and some mold had set in. The apartment manager had said the mold would be taken care of, but when Peyton was finally released from the hospital, they discovered that the apartment was covered with mold. Not only is this dangerous for the average person, but for someone with her weakened immune system, the mold is far more dangerous. 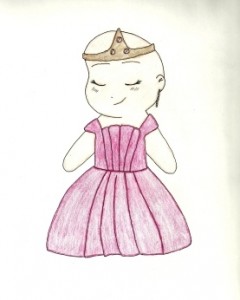 Here’s a picture of Peyton that my daughter drew for her.

We praise God that she has made it through so many critical health struggles, and pray that this latest ordeal will be resolved quickly. Peyton has been a trooper through all of this and has inspired so many people around her. I am honored to be able to call her my hero.

To remain informed about Peyton and her family’s current needs, please “Like” the Inspired by Peyton page on facebook.

If you would like to partner with me to raise money for the Leukemia and Lymphoma Society so that they can find cures and help families struggling with these diseases, please visit my Team in Training fundraising page. They helped me and my family out when we were struggling. I am hoping to raise $1800 and compete in the Nation’s Triathlon in Washington DC—a race whose proceeds also go to the Leukemia and Lymphoma Society. Any donation you can make is greatly appreciated, and anyone who donates $50 or more will receive a copy of my book, God and Cancer: Finding Hope in the Midst of Life’s Trials.