I recently watched Jack the Giant Slayer, and it reminded me of an idea I had wanted to explore but never got around to. The film is based on the fairy tale, Jack and the Beanstalk. In this well known story, the giant lives in a land that is somewhere between heaven and earth. When Jack buys or trades for some magic beans the adventure begins. Accidentally planted under his house, the bean sprouts and grows into the clouds all the way up to the giant’s land. 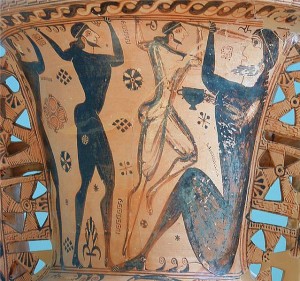 Odysseus and his men blind the cyclops Polyphemus. Does the Bible provide any historical support for such a legendary encounter?

Whether one has watched Mickey and the Beanstalk, Jack the Giant Slayer, or any other rendition of this fairy tale, the overall story is the same. Jack climbs the beanstalk and confronts a giant or group of giants that have a hankering for human flesh. Here’s what captured my attention recently. Why is it that so many stories of giants portray them as man-eating monsters? Is it just a natural fear that we have that something so much larger than ourselves could possibly devour us? Or is there any basis in reality for these ideas?

In Homer’s Odyssey, the hero Odysseus and his crew have some close encounters with man-eating giants. Book Ten tells us that upon reaching the island of the Laestrygonians, Odysseus sends men to search out the island. The men follow a large girl to her father’s palace. Here is how an online English translation of the Odyssey describes what happened next:

On entering his fine palace, they found his wife there, massive as a mountaintop, and they were shocked. She called her husband, mighty Antiphates, straight from their gathering place, and he embarked on their cruel destruction. He promptly seized one of my men, and prepared to eat him, while the other two sprang up and fled to the ships. Then Antiphates roused the city, and hearing his cry the huge Laestrygonians crowded in from all sides, a countless host of Giants not men.
From the cliffs they pelted us with the largest rocks a man could lift, and from all the ships there rose the groans of dying men and the splintering of timbers. Spearing the men like fishes, they carried them off to their loathsome feast.

Perhaps the most famous tale from the Odyssey appears one book earlier when Odysseus visited the island of the Cyclops (Kyklopes). There, Odysseus and some of his men are trapped in the cave of Polyphemus, a giant cyclops who devours six of Odysseus’ men. For you Percy Jackson fans out there, this is the same Polyphemus from Sea of Monsters who likes to eat satyrs and guards the golden fleece. Odysseus eventually flees from the cave after burning out the cyclops’ eye, and then barely escapes the island.

The idea of monstrous giants devouring people can be found elsewhere in ancient literature. The Book of Enoch is not part of the Bible, but it is quoted in the short book of Jude and its early chapters expand upon the fallen angel view of Genesis 6:1–4. According to 1 Enoch, 200 angels decided to marry women and sire children by them. The leaders of these angels are named, and then we are told the following:

And all the others together with them took unto themselves wives, and each chose for himself one, and they began to go in unto them and to defile themselves with them…And they became pregnant, and they bare great giants…who consumed all the acquisitions of men. And when men could no longer sustain them, the giants turned against them and devoured mankind. (1 Enoch 7:1–5)

Similar ideas can be found in other ancient Jewish literature. For example, the Book of Jubilees echoes Enoch on this point.

And it came to pass when the children of men began to multiply on the face of the earth and daughters were born unto them, that the angels of God saw them on a certain year of this jubilee, that they were beautiful to look upon; and they took themselves wives of all whom they chose, and they bare unto them sons and they were giants. And lawlessness increased on the earth and all flesh corrupted its way, alike men and cattle and beasts and birds and everything that walketh on the earth-all of them corrupted their ways and their orders, and they began to devour each other. (Jubilees 5:1–2)

The story of Beowulf might meet this criteria too since the monster Grendel kills and devours plenty of knights in this epic poem (although I happen to think Grendel was something different). I’ve even heard of some Native American legends that tell of similar ideas.

So why is the idea of man-eating giants so prevalent in ancient cultures? Does the Bible talk about this at all? Let’s take a look at the Old Testament book of Numbers to see an intriguing passage. Moses sent twelve spies into the Promised Land. Of these twelve, only two (Joshua and Caleb) encouraged the people to follow the Lord’s command to go out and conquer the land. The other ten spies were obviously afraid of carrying out the command. They reported the following details:

Thus they told him, and said, “We went into the land where you sent us; and it certainly does flow with milk and honey, and this is its fruit. Nevertheless, the people who live in the land are strong, and the cities are fortified and very large; and moreover, we saw the descendants of Anak there. Amalek is living in the land of the Negev and the Hittites and the Jebusites and the Amorites are living in the hill country, and the Canaanites are living by the sea and by the side of the Jordan.”

After Caleb tried to encourage the people to be obedient the frightened spies continued.

So they gave out to the sons of Israel a bad report of the land which they had spied out, saying, “The land through which we have gone, in spying it out, is a land that devours its inhabitants; and all the people whom we saw in it are men of great size. There also we saw the Nephilim (the sons of Anak are part of the Nephilim); and we became like grasshoppers in our own sight, and so we were in their sight.” (Numbers 13:28–33, NASB)

The spies reported that they had seen giants in the land. The Amorites were giants (Amos 2:9), as were the Anakim or sons of Anak, who were “part of the Nephilim.” As I’ve explained before on this blog, the word Nephilim means “giants” (it does not mean “fallen ones” as is popularly claimed), and in this case it may refer to a specific race or line of giants.

Now look at the phrase that I put in bold. It was “a land that devours its inhabitants.” Commentators have given several possible meanings for this phrase, including one that would fit the theme of this blog post quite well. What if this phrase meant that the giants they saw in the land actually devoured the land’s inhabitants? That is, the giants ate people. If that is the proper way to understand this phrase, then it certainly helps us understand why so many Israelites would be afraid of trying to go to battle. What could be more intimidating to an ancient army than a host of man-eating giants?

Some people will object to commenting on this passage as though the spies accurately described the land because it says that they gave a bad or evil report. However, the Hebrew word used here does not refer to a false report, but a true report about bad tidings or true statements made with sinister intentions. It is the same word used to describe Joseph’s report about his brothers’ bad behavior in Genesis 37:2. The text is not telling us that the spies lied. After all, neither Joshua nor Caleb attempted to refute what the spies reported. Instead, they tried to encourage the people to prepare for battle while the other spies were trying to discourage the people.

So let’s assume that the giants in this land were eating people. When Joshua and the Israelites finally conquered the land approximately forty years later (c. 1400 BC), they either killed or drove out the giants (and other inhabitants) in nearly every place. Joshua 11:22 tells us that there were no more Anakim left in the land except in Gaza, Gath, and Ashdod. Those familiar with the account of David and Goliath may remember that Goliath was from Gath (1 Samuel 17), as were a handful of other giants mentioned in 2 Samuel 21.

Since the Israelites attacked from the east, it seems very plausible that some of the giants who fled would have traveled west via the Mediterranean Sea. What if some of these giants settled on some of the islands in the nearby Aegean Sea? And what if these islands just happened to be the same islands that were supposedly visited by Odysseus during his wayward return from the Trojan War, which supposedly took place about two centuries after Joshua and the Israelites entered the Promised Land? This idea was offered in 1833 by John Bathurst Deane in his book on serpent worship throughout the world.

It is conjectured by Bochart, that the first migration of the Hivites, who fled before Joshua, was that of the Cadmonites of Mount Hermon, whose leader was Cadmus, so called from the name of the people whom he commanded…Under the guidance of this hero…colonies of Ophites were settled in Cyprus, Rhodes, Samos, Chios, Icaria, etc., in those islands of the Archipelago which were adjacent to Asia Minor, if not in those which were nearer to Greece. (Deane, The Worship of the Serpent, pp. 109–110)

Could it be that some of the tall tales we read about in the Odyssey were actually grounded in real history? Obviously, these stories were greatly embellished, but if there was a real Odysseus, who returned from a real Trojan War through the Aegean Sea, is it possible that the man-eating giants he supposedly encountered were actual descendants of man-eating giants that may have been described in Numbers 13?

I realize there is quite a bit of speculation in this post. I don’t have any solid evidence that some of the giants fled to the islands of the Aegean Sea. Scripture certainly doesn’t reveal this information, although the idea is consistent with the Bible. Also, this scenario is contingent upon one particular meaning of a Hebrew phrase that is uncertain (“a land that devours itself”). Nevertheless, it provides a reasonable explanation as to why there are so many ancient accounts of man-eating giants in so many cultures from around the world. It also fits in well with the connections that can be seen between the biblical teaching on these giants (including their origin) and other ideas common in Greek and other ancient mythologies. But those connections will have to wait for another blog post.