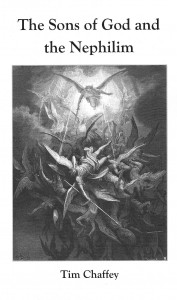 My Th.M. thesis provides an in-depth look at this intriguing topic. It is available in print from my online store or on Amazon Kindle.

I have previously written a great deal on the sons of God and the nephilim. This was the focus of my ThM thesis, and people have asked me many questions about them. The Bible first mentions these two groups in Genesis 6:1–4 and this passage has been the subject of controversy, misinformation, and just flat out poor teaching.

The earliest view, based on documents we still have from ancient Jews and Christians, is that the sons of God were heavenly beings who married women and sired children by them. The giant offspring were called nephilim, a term that means “giants.” Other views have arisen which see the sons of God as being humans, while attempting to define nephilim to mean “fallen ones” or something similar.

I will not rehash all of the strengths and weaknesses of the various positions here. If you are interested in these details, I recommend that you go back and read my seven-part series on the subject, which was essentially a brief summary of my thesis.

In this post, I merely want to dig a bit deeper into addressing what is potentially the strongest argument against the fallen angel view.1 So this post is not meant to be a direct argument for the traditional position, rather it is primarily a critique of an argument used against the fallen angel interpretation. Those who oppose this heavenly being view often cite Matthew 22:30 or Luke 20:35–36, believing that in these passages Jesus clearly taught that angels cannot marry. If that is what He claimed in these verses, then it would certainly put an end to the notion that the sons of God (Hebrew bene ha ‘elohim) were heavenly beings, and I would abandon this view in a heartbeat. But what did Jesus really say?

Perhaps the most common verse used against the idea that sons of God were angelic beings is Matthew 22:30: “For in the resurrection they neither marry nor are given in marriage, but are like angels in heaven.” At first glance, this would seem like a good argument against the fallen angel view.

A parallel passage in Mark makes the same point, but uses slightly different terminology that helps to establish the meaning. “For when they rise from the dead, they neither marry nor are given in marriage, but are like angels in heaven” (Mark 12:25). Matthew’s “in the resurrection” is obviously identical to Mark’s “when they rise from the dead.” So in response to the Sadducees’ challenge, Jesus told them that they were in error because when believers are raised in glorified bodies at the resurrection they will no longer marry or be given in marriage and will be like the angels in heaven.

Those opposed to the fallen angel view often cite these verses thinking they have proved their point that angels cannot marry and sire children. But is that really stated here? Jesus clearly stated that the angels “in heaven” do not do this, but He did not say whether they were capable of doing such a deed. Also, He specifically pointed out that the ones “in heaven” don’t do this. But what about the angels who left their proper abode and are currently being held in chains of darkness because of the sinful activity they engaged in during Noah’s day (1 Peter 3:20; 2 Peter 2:4; Jude 6)?

Clearly, the two verses from Matthew and Mark do not settle the matter, but in the parallel passage found in Luke, Jesus has more to say about this issue. At first glance, it may seem as if He spoke against the angelic view, but a closer look reveals that He may have actually acknowledged its accuracy.

In this passage, Jesus corrected the Sadducees, a group within ancient Israel who denied the future resurrection of the dead. They had asked Him a theoretical question about which husband a woman would be married to “in the resurrection” if she’d had seven husbands during her lifetime. Much could be said about their attempt to deny the future resurrection and the Lord’s masterful response (He quoted one of their favorite verses to show them that they were wrong), but it is His teaching about the “sons of God” that is particularly relevant to our study here.

Those who are “considered worthy to attain to that age and the resurrection from the dead” are the ones who do not marry and are not given in marriage. They are the ones who “cannot die anymore, because they are like angels, and are sons of God, being sons of the resurrection.” So in the future, when believers are resurrected (i.e., when we receive our glorified bodies), we will be sons of God and equal to angels (at least in the sense of not marrying).

Aren’t We Already Sons of God?

So what does this have to do with the sons of God and the nephilim? Perhaps nothing at all. There is not necessarily a connection between the Hebrew terms translated “sons of God” and the Greek words translated the same way. And if this is the case, then the oft-repeated assertion against the fallen angel view that all believers are sons of God would be irrelevant. And if there is a connection, then it’s very possible that the Lord’s words here support the view that the sons of God were heavenly beings who left heaven and married women. 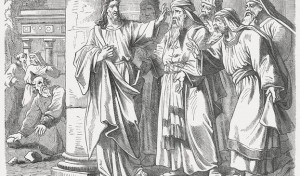 Jesus masterfully corrected the Sadducees’ rejection of the future resurrection of the dead. However, contrary to a popular claim, He did not rule out the fallen angel view of Genesis 6. In fact, He may have actually endorsed it.
Image from christianity-live.audiencemedia.com

The contrast Jesus made is the key to understanding how this passage may be relevant to the discussion. Currently, we are “people of this age” (NET) or “sons of this age” (NKJV), but upon being resurrected in glorified bodies, believers will be “equal to the angels” and will be “sons of God, being sons of the resurrection” (Luke 20:36). At the resurrection our corruptible bodies put on incorruption and our mortal bodies put on immortality (1 Corinthians 15:53), and it is at this time that we will be like the angels. This “revealing of the sons of God” is what the whole creation longs for (Romans 8:19).

Believers are occasionally called “sons of God” or “children of God” in the New Testament. This has been one of the key arguments used by those who seek to identify the “sons of God” in Genesis 6 as simply human. Not only does this claim badly misrepresent the Hebrew phrase and the context of the passage,2 but I believe it misses how the term is nuanced in the New Testament. That is, when we are identified as “sons of God” it is essentially a claim about our future state of being, just as Jesus used the phrase in our passage. In the Sermon on the Mount, He said that the peacemakers “shall be called sons of God” (Matthew 5:9). And, as cited above, Paul wrote of “the revealing of the sons of God” as a future event (Romans 8:19).

On two occasions Paul identified Christians as “sons of God” and may have used the term to describe our present state (Romans 8:14 and Galatians 3:26). However, based on the surrounding contexts, particularly in Romans 8, it is likely that Paul used the term to describe our positional state—since our resurrection is guaranteed, one can speak of Christians as sons of God because that is our future. Even when similar terms are used for people, they seem to point to the future.3

Christians are sons of God in that we have been adopted by the Father, although the fullness of this position has not yet been entirely realized or attained. Indeed, we are co-heirs with Christ, and while that inheritance was earned by Christ’s entirely sufficient sacrifice and is guaranteed by the Holy Spirit (2 Corinthians 1:22), we are still “eagerly waiting for the adoption, the redemption of our body” (Romans 8:24). Perhaps we could summarize it this way: positionally, we are sons of God by adoption, but our status as sons of God will not be finalized until our revealing as the sons of God (Romans 8:19) when we put on our heavenly dwelling (2 Corinthians 5:2–4).

With this in mind, let’s revisit what Jesus told the Sadducees. He said that “those who are counted worthy to attain that age, and the resurrection from the dead, neither marry nor are given in marriage; nor can they die anymore, for they are equal to the angels and are sons of God, being sons of the resurrection” (Luke 20:35–36, NKJV).

Since we actually become “sons of God” in the fullest sense when we receive glorified bodies, then this term does not refer to normal humanity. It refers to individuals whose mode of existence is fit for the heavenly realm, such as angelic beings and glorified humans. Paul contrasted the believer’s current body with his future body: “it is sown a natural body, it is raised a spiritual body” (1 Corinthians 15:44). The use of this term is quite similar to the way ’elohim is used to refer to beings from the spiritual realm.

One of the reasons we will be equal to angels and be identified as sons of God is because we will possess a spiritual body, which is still a physical body, but one that is incorruptible and immortal—it is one dominated by the spirit rather than the flesh. As sons of the resurrection, we will be like the angels.

The Hebrew term in the Old Testament translated as “sons of God” in English clearly refers to heavenly beings. And while there may not necessarily be a direct connection with the Greek term translated as “sons of God” in the New Testament, it is indeed interesting that it makes more sense to understand the Greek phrase as referring to those who have been resurrected in glorified bodies.