↓
Home Menu ↓
Skip to primary content
Skip to secondary content
Home→Apologetics→Fallen: The Sons of God and the Nephilim Is Finally Available 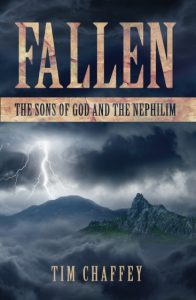 The front cover of my new book, Fallen: The Sons of God and the Nephilim. Click here to order from my online store.

I have been waiting a long time to write this blog post—a little over eight years to be more precise. Ever since completing my Th.M. degree and successfully defending my thesis on the sons of God and the Nephilim (Genesis 6:1–4), I have been rewriting my thesis as a popular level resource instead of an academic paper. Regular readers of this blog and the comment sections on particular threads (particularly those on subjects related to the sons of God and the Nephilim) know that I have been pointing to this day for quite a while.

At long last, Fallen: The Sons of God and the Nephilim is available from my store, and I believe it is the most thorough book available on this topic. At nearly 500 pages, Fallen brings clarity to passages that have confused and frustrated countless Bible readers. If you have ever wondered what Genesis 6:1–4 is about, or if you think that it’s too controversial or just too vague to confidently interpret, then Fallen is for you.

The book is divided into four sections. After some introductory matters, the first section spans 17 chapters and deals with properly identifying the sons of God. Each of the three major views is carefully analyzed by looking first at the positive arguments and then addressing the many objections. Considerable attention is also given to the divine council in this section.

The second section consists of 10 chapters focused on the Nephilim. What does the Bible say about them? Who were they? Were they giants? How tall were they? Why were they here? How could they have been on the earth after the Flood? These and many other questions are tackled.

The book’s third section features five chapters dealing with peripheral yet practical matters. These chapters didn’t quite fit in the logical flow of the first two sections of the book and are somewhat speculative. But I believe they are important for a richer understanding of the topic. Is there any supporting evidence for giants from outside the Bible? What can we learn about these matters from other ancient cultures? Is the activity described in Genesis 6:1–4 still going on? Are there some popular arguments that should be avoided?

The final section of the book is made up of nine appendixes. Some of these could have been entire chapters, but they did not really fit anywhere in the first three sections. Some of the appendixes are short and deal with frequently asked questions.

For a full list of the chapters, see the “Look Inside” feature on the book’s Amazon page.

To wrap up this post, I want to address several questions to help you understand more about the book.

Why have you spent so much time on this topic?

This is an excellent question. Everyone should agree that one’s views on the sons of God and the Nephilim have nothing to do with salvation, so why should anyone spend much time on these topics? The simple answer is that this passage is part of the Bible, and since I believe God wanted this information in His Word then I think Christians need to do their best to understand it. Also, there is a huge amount of misinformation and sensationalism that often accompanies discussion of these verses. My goal was for Fallen to provide a serious and respectful study of these intriguing topics.

Sometimes, people ask this question with a bit of cynicism or derision, as if I have been wasting my time or doing something wrong by focusing my energy on the passage. But this question could be asked of a huge number of biblical topics that are not directly related to one’s salvation, and yet we can find scores of books on plenty of these subjects. Are the critics accusing these authors of wasting their time?

Furthermore, too many Christians think salvation is the only subject worth discussing at length, but Christians are called to mature in their faith and to study Scripture so that they might properly understand it—all of it, not just the parts about salvation (2 Timothy 2:15). One of the reasons why I took over eight years to complete this book is because during that time I also wrote a book and recorded nearly eight hours of material on what is by far my favorite topic and one that is at the core of the salvation message, the Resurrection of Jesus Christ (see In Defense of Easter, Risen: Without a Doubt, He Is Risen, and Shrouded in Mystery). So I do focus on other matters.

Michael Heiser’s book, The Unseen Realm, is often viewed as the definitive work on this subject. How is Fallen different?

When I received an advance copy of The Unseen Realm in 2015, I had already written about half of Fallen, and I was concerned that Heiser’s book would make mine unnecessary. As I read his book, I was relieved to discover that it was quite different, even though we reach similar conclusions on most of the topics. Check out my review of The Unseen Realm.

Those familiar with the distinction between biblical theology and systematic theology will probably understand what I mean here. Generally speaking, Heiser’s book treats this topic from the perspective of biblical theology while Fallen is more of a systematic approach. That is, Heiser moves chronologically through the Bible examining how the original audience might have understood the message, keeping in mind the progressive revelation of Scripture and cultural limitations. A systematic approach starts with the completed text and logically organizes everything Scripture has to say on a subject, while taking into account relevant scientific and historical findings.

Both approaches are important and are dependent upon each other. A good systematic theology must rely on strong biblical theology to ensure each passage is properly understood in its context. Meanwhile, since the Bible is inspired by God and inerrant, a good biblical theology must be tempered by a strong systematic theology to make sure one’s conclusions on early passages do not contradict later passages or scientific and historical data.

That being said, the two books are quite different. For example, Heiser spends only about three pages addressing two of the major views on the sons of God, the Sethite and Royalty views. In a sense, Heiser assumes (rightly, I believe) that the Fallen Angel view is correct and moves forward on that basis. The alternative views are indirectly critiqued elsewhere in the book as he shows how the Fallen Angel view makes sense of other passages. In contrast, Fallen devotes sixteen chapters to demonstrating the correct understanding of the sons of God. Each view is given significant space, detailing the positive arguments and the objections. In fact, there are four chapters devoted to the many objections to the Fallen Angel view.

There are plenty of other differences. Despite a handful of different conclusions on peripheral matters, I believe that Unseen Realm and Fallen are complementary books that will provide readers with a tremendous study on these fascinating subjects.

Will Fallen Be Available from Your Employer?

No. Regular readers of this blog know that I have been employed by Answers in Genesis since 2010. As a ministry, Answers in Genesis does not hold an official view on Genesis 6:1–4, so I would not expect them to carry a book that strongly advocates for one view over the others. That’s not to say that the ministry completely avoids the topic. Several years ago, I wrote an article for Answers magazine to provide a neutral overview of the three main views on the sons of God and the differing views on the Nephilim (see “Battle Over the Nephilim”).

One thing I like to point out when issues like this arise is that it shows that Christians can work side by side with fellow believers who hold opposing perspectives on controversial topics that do not directly relate to salvation. This is how it should be.

Do you rely on the books of Enoch and Jubilees for your position?

Definitely not! One of the many objections I’ve heard against the Fallen Angel view is that it is dependent upon the book of Enoch and other Jewish writings of the intertestamental period. While there are some people who promote this perspective and give a great deal of attention to the book of Enoch, my book rarely mentions it. In fact, I don’t even discuss its identification of the sons of God until page 125 in a chapter that surveys ancient Jewish writings on the subject. This occurs after two chapters focusing on the support for the Fallen Angel view from the Old Testament and New Testament. The Bible is my primary source throughout the book except when surveying ancient writings and cultural beliefs.

Nope. Although several books have been published about fallen angels and Nephilim having some role to play in end times events, my book has nothing like this. The only time this sort of issue comes up in Fallen is in the chapter near the end about arguments that we should avoid. In other words, I specifically encourage people not to engage in this type of speculation.

This is the number one objection to the Fallen Angel view, and easily the most important one. If Jesus spoke against it, then the Fallen Angel view cannot be correct. However, this idea is based on a misreading of Matthew 22:30. Jesus never said that angels cannot marry or produce offspring. He simply stated that the angels in heaven do not marry. He didn’t mention what they can or cannot do while in rebellion on earth. Also, there is a huge difference between cannot and do not. For example, I do not eat chili—ever! I despise the stuff. But that doesn’t mean that I cannot do it. Of course, whether angels are capable of physically manifesting and siring children is of a more serious matter than chili, but Fallen addresses these concerns in detail. This blog has already addressed some issues related to what Jesus said about the Fallen Angel view, including the possibility that He might have endorsed it. (see “Did Jesus Teach that Angels Cannot Marry?”).

Where Can I Purchase a Copy of Fallen?

Right now, signed copies of Fallen are available at my web store. Otherwise, you can find the paperback and Kindle version on Amazon. If you read and enjoy the book, please take a few moments to leave a positive review on Amazon and Goodreads.