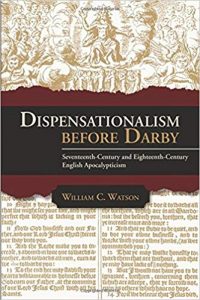 Dispensationalism Before Darby corrects a common misconception about the origins of Dispensational beliefs (image from Amazon.com)

This book is perfectly titled and offers an immediate challenge to those who allege that John Nelson Darby invented the system of Bible interpretation known as Dispensationalism around the year 1830. Watson provided an accurate subtitle as well: Seventeenth-Century and Eighteenth Century English Apocalypticism. For those unfamiliar with the term, Dispensationalism is marked by three key principles, known as the sine qua non of Dispensationalism:

Evangelicals and other conservative Christians have traditionally adopted either Dispensationalism or Covenant Theology as their overarching interpretive framework. Generally speaking, whereas Dispensationalism maintains a strong distinction between Israel and the church, Covenantalists view the church as the fulfillment, extension, or replacement of Israel in God’s redemptive plan (most do not like the term replacement in this context). In recent decades, Dispensationalism seems to have become less popular, and there have been some attempts to find ground somewhere between the two views, such as Progressive Dispensationalism or New Covenant Theology. Much more could be said about all of these views, but this post will focus on reviewing Watson’s work.

William C. Watson is a professor of history at Colorado Christian University, specializing in seventeenth-century and eighteenth-century English history. He earned an M.A. and Ph.D. in British history from the University of California, Riverside.

As mentioned in the first paragraph, a common argument against Dispensationalism (and the pretribulation rapture) is that it was invented by John Nelson Darby around 1830. Watson proves beyond any shadow of a doubt that this popular belief is absolutely false and those who promote it grossly mischaracterize church history. It is safe to say that Darby systematized and popularized Dispensationalism, and thus it is fair to identify him as the father of modern Dispensationalism, but every major element of the belief system was commonly taught in England and North America for at least two centuries before Darby. Yes, a belief in a literal thousand-year kingdom for the Jewish people (the Millennium), a pre-tribulation rapture, a return of the Jewish people to the land of Israel, and other hallmarks of Dispensationalism were well known in the centuries before Darby. Of course, Dispensationalists claim that these beliefs come right from the pages of Scripture, but that is a debate for another time.

Watson’s book includes hundreds of lengthy quotations from 17th and 18th century pastors and theologians whose views either matched or were quite similar to those of classic Dispensationalism. Let’s consider a handful of examples. Note: Watson preserved the original spelling and capitalization of the various writers, which was often quite different than the standards found in modern English.

John Birchensa published The History of Scripture in 1660 and used the term dispensation in the context of drawing a distinction between God’s differing plans for Jews and Gentiles in different eras.

[I]ndeavor to informe your selfe of those things which belong unto your present Dispensation. Look not for the Accomplishment of those things in your Age, which the Scripture hath declared shall not be brought to passe until future Times. Take heed how you apply those Promises that are made unto the Jewes, (and shall not be fulfilled unto them before their restoring out of their present Captivity) unto the Gentiles who shall live before the conversion of the Jewes. (Watson, 206)

Robert Maton (1607–c. 1653) published several works about prophecy shortly after 1642, when press censorship ended in England. He wrote the following about Ezekiel, Joel, Zechariah, and Revelation:

Ephraim Huit (1591–1644), founder of the first church in Connecticut in 1639, wrote the following about the future kingdom God would give the Jewish people:

Thirdly, upon this comming of the Son of Man in the cloudes…the kingdom is given to the Iewes [Jews]…but upon the Incarnation of our Lord, the kingdom was taken from the Iewes, and given to the Romanes.

Huit added that the Jews of that time would be “very troublous” but they would finally be saved when Christ “and gods Church as a Bride royally attired descends from Heaven.” (Watson, 142–143)

What may be conceived to be the cause of this rapture of the Saints on high to meet the Lord in the clouds, rather then to wait his coming to the earth. What if it bee, that they may be preserved during the conflagration of the earth, and the works thereof, 2 Pet.3.10. That as Noah, and his family were preserved from the deluge, by being lift up above the waters in the Ark, so should the Saints at the conflagration bee lift up in the clouds unto their Ark, Christ, to be preserved from the Deluge of fire, wherein the wicked shall be consumed? (Watson p. 145)

Holmes further explained that the rapture would coincide with the calling of the Jews.

The likeliest maine time to make out the true meaning of this Text [“they will look upon him whom they have pierced and mourn” Zachariah 12:10] is the time of the general Call, and conversion of the Jewes yet to come, at the beginning of the Restitution of all things…[T]his coming is meant of a coming after his Ascension, and yet before the ultimate day of doome….HEE COMETH implies a future thing…it is not intended of his last Act that ever hee will doe, which is the ultimate judgment. BEHOLD implies some eminent coming, and none more eminent than this, for the RESTITUTION OF ALL THINGS…HEE cometh…IN the clouds…this coming shall not bee so obscure, as his Incarnation…but he shall come conspicuous and glorious visibly to all upon the earth…Zechary the Prophet, and John the Apostle both prophesie in the aforesaid places of one and the same personall appearance of Christ visibly to the eyes of men on earth after his Ascension. But this cannot be understood of his appearance at the ultimate general judgement, because they speak of his pouring out of grace, and giving repentance to the families of the Jewes. (Watson p. 145)

The writers cited above and throughout the book would not necessarily agree on every major point of modern Dispensationalism. Part of the reason for this is that these men were in the early stage of trying to figure out eschatology (study of end times). The early Reformers generally did not focus much on eschatology so they did little to correct Roman Catholic eschatology—they were focused largely on soteriology (study of salvation), and rightly so. Within a century of the Reformation, many theologians and pastors came to believe that Rome’s eschatology needed similar scrutiny.

Watson does not lionize the writers he cites, and he is unafraid to point out their mistakes. Like some today who practice “newspaper eschatology” (reading current events into the prophecies of Scripture) some of these 16th and 17th century writers viewed their own trying circumstances as the events prophesied in the Bible. Also, a handful of those cited by Watson were not entirely orthodox in more central doctrines. After all, if one happens to be correct in their eschatology, it does not guarantee the rest of their theology will be sound. Nevertheless, despite their errors and disagreements, it is easy to see Dispensational beliefs in their writings.

The “Darby invented Dispensationalism” myth is extremely common, but this refrain is demonstrably false. There have also been many vicious attacks on Darby’s character, but these baseless attacks disparage and slander a faithful Christian brother. Yet both of these ideas commit the genetic fallacy in that they attempt to discount Dispensationalism by going after its perceived source. Even if Darby were the originator of this view, it would not invalidate Dispensationalism. The system must be examined in light of Scripture. The fact that all the elements of the system existed long before Darby does not prove it to be true either, and Watson does not claim that he has proven the view to be true. He set out to correct a fallacious argument and he succeeded in obliterating it.

I knew before reading this that Darby did not invent Dispensationalism, and I was familiar with a few of the writings in this book, but I had no idea how common Dispensational ideas were in the 17th and 18th centuries. Perhaps most surprising to me were the number of Puritans who held to views consistent with Dispensationalism. I assumed that all, or nearly all of the Puritans would have been Covenantalists (given their close affiliation with Calvinist soteriology), but a sizeable minority of Puritan writers held eschatological views consistent with modern Dispensationalists. Watson wrote, “Further, many of those revered by contemporary preterists—such as Westminster Assembly divines, Anglican bishops, and renowned Puritans on both sides of the Atlantic Ocean—were actually premillennialists. While preterists claim that premillennialism is new; it is actually preterism that was considered an innovation in the early eighteenth century” (Watson, viii).

Since the book consists largely of quotes from 16th and 17th century writers along with explanatory paragraphs from Watson to introduce each writer and summarize his view, it can be a bit tedious during its 373 pages. However, it serves as an outstanding reference work. Watson apologized for this but he knew of no other way to include more than 350 primary sources and give them enough space to prevent the charge that he was pulling quotes out of context.

The book could also use one more round of editing. I found several minor formatting errors (missing spaces between words, general typos, etc.). Hopefully, these will be corrected in a second printing. However, I still wholeheartedly recommend it for anyone interested in understanding Dispensationalism, whether you are in favor of it or stand against it.

Finally, it is unbecoming of Christians to make false claims. To argue that Darby invented the pretribulation rapture and/or Dispensationalism is patently false and largely irrelevant to the debate. Many make this claim in ignorance, repeating what they’ve heard others teach. It is my hope that Watson’s book will go a long way to eliminating this notion. As Christians, we need to strive to proclaim the truth in love. That means we must seek to accurately represent the beliefs of those we disagree with when we attempt to correct them. Misrepresenting an opponent’s position might lure uninformed bystanders to your cause, but it is contrary to our mandate to be people of the truth. May we all (Dispensationalists, Covenantalists, and others) strive to proclaim the truth and love one another even though we disagree on these particular issues.