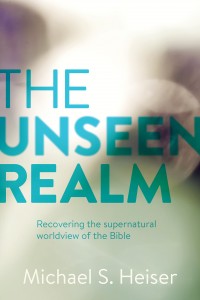 Ever since I learned Michael Heiser was writing The Unseen Realm I was excited to read it. I first discovered his work when I was doing research for my Th.M. thesis on Genesis 6:1–4. Having read much of his Ph.D. dissertation on the divine council, I looked forward to seeing this book published so that his excellent research would be accessible to more people.

Dr. Heiser earned his Ph.D. in Hebrew Bible and Semitic Languages from the University of Wisconsin–Madison in 2004. He runs several websites dealing with subjects that many may consider to be fringe topics, such as debunking the claims made by those who promote the ancient aliens hypothesis. He is the academic editor at Logos Bible Software (the Bible program I have used every day for over 12 years now so I greatly appreciate his work there). I’ve also read his two novels dealing with the paranormal, The Façade and its sequel, The Portent.

The Unseen Realm focuses on what Heiser calls the “Deuteronomy 32 worldview” of the Bible. For those unfamiliar with this concept, it is based on the biblical teaching of the divine council, a term that appears in Psalm 82:1, ESV. God created certain heavenly beings that regularly meet with Him, and several passages speak of this assembly as though it were a council meeting. The Lord rules over the other members, and even though He doesn’t need their advice, He often asks for it before acting (see 1 Kings 22:19–23 for a great example). In Deuteronomy 32:8–9 we learn that when God judged the people at Babel, He placed these council members (called “sons of God” or in Hebrew, bene ha ’elohim) over the various people groups, but declared that Israel would be His nation. When God disinherited the peoples at Babel He set in motion a plan to redeem mankind while confounding the evil spiritual forces that seek to thwart Him. God would build a nation from one man (Abraham), and through him, the Lord would make a great nation (Israel) that was to be a beacon of light in a dark world and an instrument of judgment on wicked nations. Eventually, God would send His Son to come in the flesh as a descendant of Abraham, and He would die for the sins of the world.

Beginning with the early chapters of Genesis and moving throughout the Bible, Dr. Heiser shows how this Deuteronomy 32 worldview shows up over and over again. In our Western mindset we frequently overlook the supernatural battle going on around us, but this book demonstrates the Bible is filled with references to this realm, hence the book’s subtitle (Recovering the Supernatural Worldview of the Bible).

At over 400 pages (in the PDF copy I was sent), there is simply too much material to address in a book review, so I will highlight a few sections that I really appreciated and point out what I felt was a weakness in the book.

I highly recommend this book, if for no other reason, students of the Bible would be exposed to the concept of the divine council. If you want the Bible, particularly the Old Testament, to come alive like never before, then you need to read about this subject. If you want to understand the cultures in and around Israel throughout the Old Testament and why Israel so quickly slipped into idolatry, then this book is for you. Dr. Heiser is the leading expert on the subject, and he does a great job of writing at a non-technical level while providing extensive documentation in the footnotes for those who want to dig deeper.

Understanding the divine council makes it much easier to see what took place before the Flood “and also afterward” whenever the “sons of God” sired children by the “daughters of men” (Genesis 6:1–4). Heiser gives ample space to this topic, showing some of the problems with the views that seek to interpret “sons of God” as human beings, and demonstrating why the earliest view (that they were heavenly beings) is the accurate one. As someone who is currently finishing up a lengthy book on the topic of the sons of God and the Nephilim, I was concerned that Heiser may have beat me to it and that I’d be “reinventing the wheel.” Thankfully, he does not dwell long on the subject. He makes a good case for his position and then moves on. So the two volumes will complement each other quite well.

Heiser’s discussion of the kherem (items and people “devoted to destruction”) in chapter 25 is outstanding. One of the things I noticed while studying for my thesis is that when Joshua conquered the land, he was only told to wipe out the men, women, and children in certain places, but in other places, he was not given this command. In fact, Moses told the people that in some cases, they could make an offer of peace with a city (Deuteronomy 20:10–15), but in other instances, they were to thoroughly wipe the people out. Understanding what was really going on in these places goes a long way to answering the skeptical attacks on God’s character for the conquering of these peoples.

The book also does a good job of helping readers learn about the ways the Israelites interacted with the people around them. Even those who penned Scripture were not afraid to use concepts and the terminology from the surrounding pagan nations, although they often needed to redefine or refine the concepts to fit within Hebrew theology. Too many Western Christians, particularly from conservative backgrounds, avoid any possible linkage of the Scriptures with Ancient Near Eastern writings. This is probably due to the abuse of this concept by the liberals who act as if the Hebrews borrowed everything from these cultures. I believe Heiser strikes a nice balance in this book.

Although I was very pleased with the book overall, I didn’t agree with everything in it. I believe the greatest weakness in the book is Heiser’s goal of finding the Deuteronomy 32 worldview in nearly every section of Scripture. It is certainly present in many places, but Heiser may have read this idea into some passages. One that comes to mind is his discussion about the Apostle Paul’s view of himself in relation to the Deuteronomy 32 worldview. I strongly disagree that when Paul wrote Romans 11:25–27, he had himself in view as the instrument to bring in the full number of Gentiles so that all Israel could be saved (p. 305). There were a few other instances where I felt the author was reading the Deuteronomy 32 worldview into a passage, so as always, be sure to compare all that you read with Scripture to make sure it lines up.

The Unseen Realm will open your eyes up to world of the Bible and the worldview of its writers, enabling you to understand so much of it to a greater degree. I recommend it for anyone wanting a deeper grasp of what the Bible is all about. To order your copy and to see what others are saying about the book, please visit The Unseen Realm website.

[Disclaimer: I received an advance PDF copy of the book from the publisher in exchange for an honest review.]