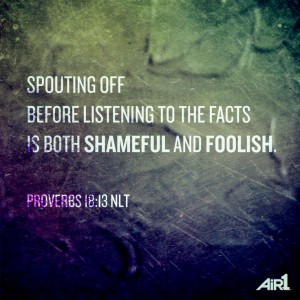 Dear Christian, do you follow this advice from Proverbs 18:13 or do you choose to give an answer before listening carefully?

I cannot count the number of times I have wished that people would stop and think before giving an answer. This is especially true when it comes to fellow Christians on Facebook. While I appreciate their attempts to be bold about their beliefs, some Christians end up making fools of themselves and other believers by the way they behave, particularly on social media.

It is supposed to be common courtesy to treat someone with respect. It is also common sense to make sure you know what you are talking about before attempting to correct or debate someone. Sadly, based on the way they respond to issues on social media, I find that many seemingly well-intentioned Christians lack both common courtesy and common sense.

The Bible makes it very clear that we should first seek to understand what someone is saying before offering our response.

“So then, my beloved brethren, let every man be swift to hear, slow to speak, slow to wrath; for the wrath of man does not produce the righteousness of God.” (James 1:19)

Unfortunately, so many Christians want to put in their two cents’ worth without taking a few minutes to actually read a quick post or a short article explaining the position. Their responses often aren’t even worth two cents, and in the end, they embarrass themselves and give skeptics more fodder for the stereotype that Christians are a bunch of ignoramuses.

As my blog readers probably know, I have been employed by Answers in Genesis for several years. I frequently monitor their Facebook activity to see if there is any objectionable content or to determine if I should write a response, especially if the article being discussed is one that I have written. We usually post an article along with a question, inviting people to respond. A few years ago, we posted an article detailing some of the many problems with radiometric dating methods and asked the question, “What are the problems with dating methods?” One of the first people to respond stated something like this:

“Christians shouldn’t be dating at all! The biblical example is courtship.”

Whether you agree with the person or not is not the point of this post. The article had nothing to do with dating between two people; it was about radiometric dating methods. The person who responded looked foolish because he or she was so quick to give an opinion when it would have simply taken ten seconds to look at the first few words of the article to see that it had nothing to do with personal relationships.

This was a perfect example where the person failed to exercise common sense and demonstrated the truthfulness of Proverbs 18:13. By failing to hear a matter before answering, this person gave a ridiculous answer that added nothing to the discussion.

The above example was more comical than most, but far too many people make a similar mistake because they fail to read or listen before responding. There have been so many times that a person attempts to make a point by using an argument that was soundly refuted in the article. Sometimes these people are attempting to defend the point of the article using outdated or incorrect information. Other times, they are attempting to push their own view while using points that were already corrected in the post. It’s one thing to disagree with an argument that’s been made, but it’s another thing altogether when the person fails to recognize that a response has already been given to their claim.

Not too long ago, someone posted their own ideas on my Facebook author page. Another person commented that they were troubled by these claims. I explained to her that the points made by the first person were erroneous and that she shouldn’t be worried about them. The first person then had the audacity to lecture me on my own author page about not responding until I had read and listened to his material. Well, I had already listened to it, and I had already responded by fully debunking his assertions that simply could not be backed up by Scripture. But apparently he didn’t find it necessary to thoroughly read my response before throwing out accusations. Too many people focus on their theological hobby horses and seek to infuse their talking points into any subject.

Too many people think they already know everything they need to know about a subject, and it can be difficult to recognize that you may be wrong or uninformed. I like to remind myself that I don’t know what I don’t know. That may not seem to be too profound, but think carefully about that statement and apply it to yourself. It’s true. You don’t know what you don’t know, so it may be that someone else has a much better handle on a topic than you do. You may think, “Yeah, but I’m standing on Scripture.” You might be, and hopefully you are. But it’s also possible that you are standing on a misinterpretation of Scripture based on some misinformation you received along the way.

We must do better as Christians. We owe it to ourselves and to others to use some common sense and common courtesy when sharing about our faith. More importantly, we owe it to God to speak what is right about Him and His Word. Sure we will have differences of opinion on some issues, and we won’t have perfect understanding of all matters, but we must be diligent to present the truth and demonstrate humility in the process.

Speak the Truth in Love

In Ephesians 4:15, Paul wrote about “speaking the truth in love” in the context of building up fellow believers so that we would be mature saints rather than immature believers who are carried about by every wind of doctrine.

How often do we follow Paul’s admonition? I have seen far too many Christians treat each other and unbelievers with contempt. Rather than having a civil discussion and treating the other person with respect, many believers lash out at those who disagree with them. What biblical basis do we have for that sort of behavior?

One of the great benefits of writing a response to someone is that you actually have the opportunity to stop and think about what you are going to write before you do it. This is harder when speaking face to face with someone, but when responding on Facebook or any other sort of written media, you have an opportunity to stop, pray, think, calm down, and write out a well-reasoned answer. Then before sending the response, you can double-check it to make sure it carries the right tone and is accurate. You can even ask someone else to check it to see if it comes across properly.

Why do we continually fail in these areas? Are we more interested in pushing our own ideas than we are in speaking the truth in love? Are we so arrogant to think we know more than someone else who may have studied the issue in great detail? Is it so important to feel like we won a debate without ever actually listening to the other position? Are we afraid to think deeply about issues and are content to remain in the shallows, or are we so prideful to think that we are already know it all even though we’ve only read a few articles on the topic?

I think most of the time the answer is much simpler than the tough questions posed above. I think that most of the time we just want to be heard, and we are in too much of a hurry to take the time to hear a matter before responding. Consequently, we act foolishly.

The Bible instructs us to be quick to listen and slow to speak, but far too many of us are slow to listen and quick to speak. By becoming better listeners, we will become better communicators. Not only will we be better at communicating the gospel message, but we may earn the right to be heard from those who won’t listen to us when we sound or act foolish. I would like to challenge all of us to do a better job in this area or we will continue to be poor examples of Christ to an unbelieving world.