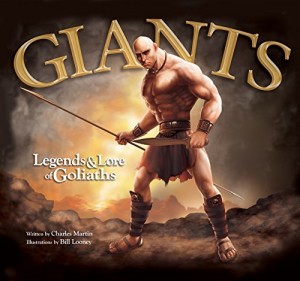 Cover image of Giants: Legends and Lore of Goliaths.
Rumors are swirling that I posed for the cover illustration. I can neither confirm nor deny such reports. 😉

A new book about giants has just been published. Given my keen interest and extensive research into this and related subjects, I decided to do a short blog post to help promote it and let you know what it’s about. [Disclaimer: I was thankful to have the opportunity to fact check the book before it went to print.]

Giants: Legends and Lore of Goliaths takes the reader on a wonderfully illustrated and interactive survey of stories about ancient giants from around the world. Giants is the third volume in the “Legends and Lore” series by Master Books (The Flood of Noah and Dragons are the first two). The author of Giants, Charles Martin Jr., previously authored the very helpful book Flood Legends: Global Clues of a Common Event, so researching ancient legends and traditions is nothing new for Martin, and once again he does an excellent job.

You may know that there are well over 200 legends of the global Flood from various cultures around the globe. These give every indication that our ancestors knew about the worldwide Flood in Noah’s day. Time and distance has led to distortions of the accurate record given in the Bible, but there are enough traces of the truth to tie these legends back to the actual event. In fact, many of these cultures also include legends that sound very much like the Bible’s creation account and the Babel event.

There are also many dragon legends which speak of brave knights fighting these beasts and these monsters terrorizing towns. What many people don’t realize is that the dragons in many of these legends match the descriptions of dinosaurs, giving evidence that man and dinosaur truly did live at the same time, just as the Bible teaches (all the land animals were made on the same day as Adam and Eve).

Did you know that there are legends about giants all over the world as well? In fact, these stories can be found in scores of ancient cultures, and there are many similarities between them. Most readers probably have some knowledge of Greek mythology and its fascinating stories of the gods, demigods, monsters, and heroes. The Greeks believed that the gods (like Zeus and Poseidon) would sire children with human women and their offspring would be demigods. Often these demigods were described as giants.

Greek mythology may be the source of the most famous of these legends, but there are so many cultures that tell similar stories. They can be found in North and South America, the Middle East, Asia, Europe, and the Pacific Islands. Why do so many ancient people groups separated by oceans, mountains, and centuries have similar tales? Could it be that there really were giants on the earth at some point? Is it possible that many of these stories, though distorted and embellished, point back to real historical people and events? This book highlights some intriguing possibilities about these connections.

The Bible indicates that there were giants on the earth both before the Flood and after the Flood—whenever the sons of God married and had intimate relations with the daughters of men (Genesis 6:4). The Israelites under Moses and Joshua fought against several groups of giants as they took possession of the land God had given to their forefather Abraham. David famously battled the Philistine giant Goliath, and some of David’s warriors would later fight against some giants from the same area as Goliath.

Giants: Legends and Lore of Goliaths offers an engaging introduction to this fascinating topic. Readers of the other books in this series know that these books are not designed to be exhaustive treatments of the topics they address. How could they possibly go too in-depth in just 24 illustrated pages? Nevertheless, these pages are packed with information and stories of giants. Within the book are a couple of mini-booklets about giants (including one by yours truly) and several pull-outs and flip panels that include more information.

If you’re looking for a fun read with some dynamic illustrations and you like reading about the stories, legends, and mythologies of our ancestors, then I believe Giants would be a great book for you. If you’ve ever wondered about this topic and how it might relate to the biblical passages about giants, then Giants is a great book for you. Order it today and enjoy!

For more information on the biblical topic of giants, you can check out the following blog posts I’ve written (these are just a few of more than a dozen):