↓
Home Menu ↓
Skip to primary content
Skip to secondary content
Home→Interpretation→King Saul, a Witch, and an Elohim—Part One 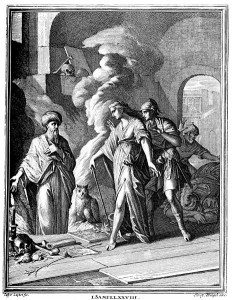 The Spirit of Samuel and King Saul at En Dor by Casper Luiken (1712).

One of the strangest accounts in Scripture appears in 1 Samuel 28. On the night before his death, Israel’s first king, Saul, made an infamous visit to a medium in hopes of contacting the deceased prophet Samuel. What happened during their encounter has been the source of some contention among interpreters.

King Saul fought many battles, and it was customary for him to seek the Lord’s favor prior to a conflict. This is not to say that he was a faithful king, but he had previously wanted to hear from God before going to war (1 Samuel 13:12 and 15:1). And now that Samuel had passed away, Saul was quite fearful about what the following day’s battle against the Philistines would bring.

The mediums and spiritists had already been kicked out of the land (1 Samuel 28:3), but Saul still wanted to hear what Samuel had to say. So Saul and some of his men went to En Dor to ask a medium to contact Samuel for him—an action strictly forbidden in Deuteronomy 18:10–12. What happened next has been debated for centuries.

A “spirit” (1 Samuel 28:13) appeared and told Saul that he would die the next day. But was it really Samuel who appeared or was it an evil spirit impersonating Samuel?

Matthew Henry’s comments represent the beliefs of many Christians on this issue. He confidently stated that Satan came “in disguise, in the disguise of Samuel’s mantle”1

For Henry, this is an open-and-shut case. He wrote, “That it could not be the soul of Samuel himself they might easily apprehend when it ascended out of the earth, for the spirit of a man, much more of a good man, goes upward, Eccl. 3:21.”2 And since Satan is said to be able to transform himself into an angel of light (2 Corinthians 11:14), Henry believed that it is quite obvious that Satan was given permission to appear to Saul.

John Gill wrote in no uncertain terms that “this was a diabolical spectre, or apparition, or the devil, that appeared in the form and shape of Samuel, and mimicked him.”3 Gill’s main argument against the apparition being Samuel himself is that the Lord’s prophet would not have been at the beck and call of a witch.

This opinion is also shared in the Pulpit Commentary, and it has been quite popular among Christians in general. But does it really handle the text properly?

An Appearance of Samuel

As with any debated passage, it is important to carefully consider what the text actually states. In this strange encounter, we are told by the writer in very plain language that it was Samuel who appeared to Saul. Consider each of the following verses, and notice that they are not spoken by Saul or the medium, but are part of the narration. In other words, it is the author of 1 Samuel 28 who is telling us that Samuel appeared.

“And Saul perceived that it was Samuel, and he stooped with his face to the ground and bowed down.” (v. 14)

“Then Samuel said: ‘So why do you ask me, seeing the Lord has departed from you and has become your enemy?’” (v. 16)

“Immediately Saul fell full length on the ground, and was dreadfully afraid because of the words of Samuel.” (v. 20)

Five times the narrator tells us that it was Samuel. The author gives no indication in the text that this is not really Samuel. It does not say, “Now the spirit impersonating Samuel said to Saul…” or anything of the sort. The text simply tells us that Samuel appeared and delivered a message to Saul.

Indeed, the straightforward meaning of the text is that it actually was Samuel who appeared to Saul. While this alone makes a strong case for the position, it is not the only evidence. What Saul was told by the “spirit” also came to pass.

On the following day, Saul and his sons were slain by the Philistines (1 Samuel 31:6), just as Samuel had foretold. The Israelite army was also defeated, as prophesied by the apparition (1 Samuel 31:1, 7). 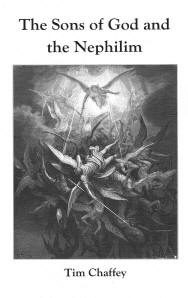 My Th.M. thesis on the sons of God and the Nephilim addresses the meaning of ‘elohim at length. It is available in print or for Kindle.

If this were an evil impostor who appeared, then we would need to conclude that this entity told the truth and accurately foretold the future. Granted, it was the very near future, and many could have guessed the outcome of the battle. Even Saul feared for his life, which is why he sought out the medium in the first place (1 Samuel 28:5). Nevertheless, Jesus said that Satan is the father of lies who “does not stand in the truth, because there is no truth in him” (John 8:44). Why should we think that in this passage Satan shows up and speaks the truth?

Taking the text at face value makes far more sense, and this would mean that Samuel appeared to Saul. This type of action is almost certainly not a normal ability for a deceased human, so it seems as if God made an exception here and sent His prophet to deliver a message of judgment to the wayward king of Israel.

I’m only halfway through the investigation of this passage. In the next post on this subject, I’ll cover some other passages that shed some light on the correct interpretation of this strange encounter. Also, this account provides an opportunity to clear up an important misunderstanding many Christians have about the Hebrew word ’elohim. Here’s a hint: that’s the word translated as “spirit” in this passage.