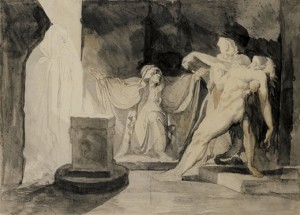 The Witch of En Dor by William Blake

Who or what appeared at En Dor when King Saul asked a medium to call for Samuel? In the first article I posted on this subject, I discussed the two primary views held by Christians: the spirit was either a satanic impostor or God actually sent Samuel’s spirit to pronounce judgment on the disobedient king.

Many Christians favor the idea that an evil spirit simply impersonated Samuel, but the text seems to say otherwise. The narrative calls the entity “Samuel” five different times and gives no indication that we should look for another meaning. Also, the words that the spirit spoke were completely true—Saul and his sons did die that day. This post will explore other passages that help us properly interpret 1 Samuel 28, and we’ll also clear up some confusion about one of the most important words in the Bible.

Do Other Passages Provide Clues to the Proper Interpretation?

King Saul had previously disobeyed a command from the Lord to completely destroy the Amalekites and their cattle. After Samuel pronounced judgment on the king for his unfaithfulness we are told that they went their separate ways—Samuel to Rama and Saul to Gibeah. Then the author tells us that “Samuel went no more to see Saul until the day of his death” (1 Samuel 15:35).

In both English and Hebrew, it is ambiguous if the “his death” refers to Samuel’s death or Saul’s death. The NET Bible translates the passage as referring to Samuel’s death: “Until the day he died Samuel did not see Saul again” (1 Samuel 15:35), but there are problems with this rendering. The NASB and ESV remain ambiguous about whose death is referenced, but they did not translate the preposition “to.” For example, the NASB states that “Samuel did not see Saul again until the day of his death” (1 Samuel 15:35). As we’ll see, this minor textual decision strongly impacts one’s interpretation.

There are at least two reasons why “his death” in 1 Samuel 15:35 should be viewed as a reference to King Saul’s death. First, if the NASB’s rendering is accurate (that Samuel did not see Saul again until the day one of them died), then it creates a contradiction in the text. In 1 Samuel 19:18, David fled from Saul to Samuel in Ramah. After sending messengers to capture David, Saul himself came to Ramah. The Spirit of God came upon Saul and he “prophesied before Samuel” (v. 24). So Samuel did see Saul again, but the prophet did not go to see Saul again until the incident at En Dor—Saul came to him. The translation of the preposition “to” makes a huge difference in 1 Samuel 15:35.

One concern about this interpretation has to do with how it could be said that Samuel’s spirit went to Saul, particularly when it was the medium who summoned him. I believe there is a reasonable solution. Samuel’s spirit still had to travel some “distance” from wherever he was (Sheol or heaven?) to where Saul was. Samuel asked, “Why have you disturbed me by bringing me up?” and the medium said, “An old man is coming up, and he is wrapped in a robe.” Both of these statements imply that the spirit was traveling from somewhere else to arrive there. Daniel 10 may also shed some light on the subject. The angel that spoke to Daniel had to travel to get to the prophet, but he was held up by the prince of Persia for 21 days (Daniel 10:13). Again, this implies some degree of movement to go from the spiritual realm to the physical world. Since they are not omnipresent, spirits are localized entities, thus they must move if they are to go from one place to another. 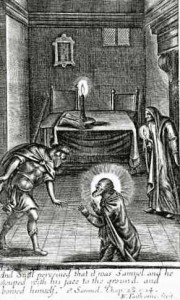 A classic depiction of Saul’s infamous visit to the medium at En Dor from Sadducismus Triumphatus by Joseph Glanvill.

The second reason we should view “his death” as a reference to Saul is found in 1 Samuel 25. In the brief record of Samuel’s death, there is no indication at all that Saul was present. After being told that Saul went home (Gibeah) sometime earlier, the text states, “Then Samuel died; and the Israelites gathered together and lamented for him, and buried him at his home in Ramah” (1 Samuel 25:1). It seems highly unlikely that, in his final day, the dying prophet would make a trip to Gibeah to see Saul. Even if Saul should be included in “the Israelites” who gathered and lamented for Samuel, this did not happen until after Samuel had died.

Based on these passages in 1 Samuel 19 and 25, we can be fairly confident that “his death” in 1 Samuel 15:35 refers to the king’s death. That being the case, it lends good support to the interpretation that it really was the spirit of Samuel that appeared at En Dor. The prophet then announced that the king would be with him (i.e. the king would die) later that day. So we see that other passages help us understand that 1 Samuel 15:35 tells us Samuel did not go to see Saul until the day that Saul died.

Perhaps the greatest cause of confusion in this passage has to do with the word that is used by the medium when she describes what she saw.

The word translated as “spirit” in this verse is ’elohim. Roughly ninety percent of the time this word is used in the Old Testament—over 2000 times—it refers to the one true God, a fact which has led to much misunderstanding. ’Elohim is not God’s name; it is better understood as a title or a description for God whose name is Yahweh.

So what does ’elohim refer to the other ten percent of the time it is used? It can refer to angels.

For you have made him a little lower than the angels (’elohim), and You have crowned him with glory and honor. (Psalm 8:5)

Some Bibles, such as the NASB, translate this verse to say that man was made “a little lower than God.” While the word certainly can refer to God, it does not on this occasion. Hebrews 2:7 quotes this verse and uses the Greek word for angels, which is how the Septuagint translated it too.

’Elohim is also used to refer to demons.

They sacrificed to demons, not to God, to gods (’elohim) they did not know, to new gods, new arrivals that your fathers did not fear. (Deuteronomy 32:17, italics in original)

The NKJV quoted above makes a curious formatting error here. It italicizes words that are not in the Hebrew but are added when necessary for a sentence to make sense. The problem here is that the first time gods is italicized, the Hebrew word is there. And that word is ’elohim.

In six verses, ’elohim is used as part of the term “sons of God” (bene ha ’elohim). These “sons of God” are a class of heavenly beings who rejoiced at creation (Job 38:7), met with God regularly (Job 1:6; 2:1), rebelled and married women (Genesis 6:2, 4), and were apparently charged with overseeing the Gentile nations (Deuteronomy 32:8, ESV).

In the majority of cases where ’elohim does not refer to the one true God, it is used in reference to the false gods worshiped by the nations. For example, Deuteronomy 6:14 states, “You shall not go after other gods (’elohim)…” This type of command is found many times in Deuteronomy. ’Elohim is also used this way in the first of the Ten Commandments: “You shall have no other gods [’elohim] before Me” (Exodus 20:3).

Understanding this important truth clears up some of the confusion about what took place in 1 Samuel 28. Yes, an ’elohim truly did appear to the medium and Saul, but it was not a god. While the term can refer to a demonic being it can also refer to the spirit of a deceased person since they primarily inhabit the spiritual realm. As such, we can be fairly certain that it was the spirit of Samuel who was permitted to pronounce judgment upon the rebellious king of Israel.

Much more could be said about this intriguing passage, but there are no compelling reasons to reject the straightforward understanding of the text—that Samuel really did appear to pronounce judgment on Saul.

I believe those who think that Satan or a demon appeared rather than Samuel are allowing their theological views to override the meaning of the text. Of course, our theology will always influence how we interpret a passage, but we must be careful not to let our ideas get in the way of rightly dividing the word of truth.