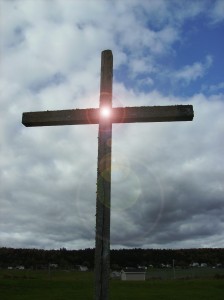 For many people in our culture, this is an extremely offensive symbol. For Christians, it’s a reminder of the ultimate act of love.

Christians are easy targets. Like punching bags that absorb blow after blow, many Christians face ridicule and mockery on a regular basis. Our current cultural milieu is decidedly anti-Christian, so believers are often in the crosshairs of the critics.

Students are often taught about the “evils” of Christianity. We are called haters because we hold to a biblical definition of marriage. We allegedly hate women because we believe that all human life has tremendous value, including the millions of unborn girls that have been killed by abortion. The media often portrays Christians as intolerant, hate-filled, ignorant bigots. Stereotypes and outright lies about Christianity are commonly promoted, and yet, Christians often remain silent and go about their daily lives.

We aren’t perfect. Not by a long shot. There is certainly truth in the cliché, “Christians aren’t perfect, just forgiven.” We sin. We complain. We gossip. We fight. We lose our tempers. We preach one thing and do another. We divorce. We lie. We’re apathetic. In short, we fail to live as God has commanded us to live.

With the exception of divorce, I’m guilty of all of the above and so much more. I’ve lost my temper with my kids. I’ve gossiped. I’ve whined and complained about situations and people. I’ve been a hypocrite. I’ve lied. I have come up short time and time again.

And yet, despite all of our flaws, I have found time and time again that Christians are the most loving and generous people on the planet. My family has experienced the loving support of our church family and other Christians during our most difficult times.

Within hours of being diagnosed with leukemia in 2006 I was placed on dozens, if not hundreds of prayer lists around the country. Thousands of people prayed for me, and scores of people, including complete strangers, contacted us to ask if there was anything they could do to help. We received cards, letters, gifts, and donations to help cover medical bills—all without asking. (In case you’re wondering, I’ve been cancer free since September of 2006.)

My wife recently underwent endoscopic brain surgery to remove a cyst on her pineal gland that was causing excruciating headaches. In the weeks and months after her surgery, we received more cards, letters, and gifts. We received a stack of gift cards from parents at my son’s Christian school. Many families signed up to bring meals to us for the first month after her surgery. People who didn’t even know each other worked together in unity to make sure all our needs were met. We didn’t ask for these things, but fellow Christians stepped up and did whatever they could to help us out. (She is recovering well and recently walked a half marathon less than three months after surgery.)

But it isn’t just my family that’s been tremendously blessed by Christians. The United States of America has been extremely blessed by Christianity, and so has every other nation on earth. The vast majority of hospitals and orphanages, as well as a large number of schools have been started by professing Christians. The U.S. has long been the leader in charitable donations and various other forms of aid delivered to areas ravaged by natural disasters, and in most cases, Christians lead the way.

Many churches have food and clothing shelters or benevolence funds to help the needy. Crisis pregnancy centers, medical missions, and many other altruistic causes are spearheaded by Christians.

But even more important than meeting the physical needs of the poor and the malnourished, Christians have delivered the gospel of Jesus Christ to millions of people. Why? Because we sincerely believe that we have all sinned against our holy Creator, and those who die in their sin will spend eternity apart from God in a place the Bible calls the lake of fire. And because we love people, we want to warn them about this future and urge them to call on the Lord Jesus to save them from their sins.

We don’t force people to convert. We don’t kill those who reject our God. We don’t revel in the fact that the lost are headed for eternal punishment. We pray for them and look for opportunities to share the good news of Jesus Christ with them again. We do this even though we know that we may be laughed at, persecuted, and branded as right-wing, hate-mongering, and child-abusing monsters.

Despite all of the good deeds performed by Christians in efforts to love their neighbors as Christ has loved them, our culture routinely classifies us as being on par with or even worse than Islamic terrorists who have murdered thousands.

We’re not looking for our culture’s approval. In a world that loves darkness rather than light because its deeds are evil, we expect to be hated for doing good. After all, our Lord and Savior was hated for doing good. In fact, He never committed any sin, and He willingly laid down His life as a sacrifice for the sins of the world.

Think about this. The Christian message is that God sent His Son into the world to save us from our sins. He willingly took our punishment upon Himself on the cross, and then demonstrated the truth of His message by rising from the dead. He commands us to love God with all our heart, soul, mind, and strength. He also commands us to love our neighbors and to love our enemies. In what sort of world could this message possibly be portrayed as evil and hateful? The sad truth is that the answer is right before us. It’s our world.

Nearly all of the good works somehow go unnoticed by our pop culture and media. Instead, despicable groups like Westboro Baptist Church are held up as representative of all Christians. This “church” is mostly from the extended family of the late Fred Phelps, a man who unsuccessfully ran as a Democrat for the governorship of Kansas on three occasions. Yet somehow these 40 or so members who hold inflammatory signs and protest military funerals supposedly represent Christianity.

Stop and think about the Christians that are in your life—the ones that you have spent a decent amount of time with. What are they really like? Are we really the nasty, angry jerks we are made out to be? Or are we different? Do we show genuine love to neighbor and enemy alike? Do we care about other people? Do we care for the sick and feed the hungry? Have we shared the gospel with you even though you may have rejected it? Do we, in some small ways, give you an accurate picture of what Jesus is like?

But there’s a greater reason that I wrote this post. It gave me an opportunity to tell you about Jesus Christ. Listen, I’ve already admitted up front that Christians will let you down. We’re sinful human beings and we make mistakes on a regular basis. Sometimes we lose our focus. Sometimes our passion for our beliefs gets in the way of treating others with respect. Hopefully, you can be patient with us and see past our faults. But the Son of God will never let you down. He is holy, just, pure, merciful, and loving. He wants you to experience His forgiveness and dwell with Him forever.

No matter what our culture says about Jesus, and no matter how many times Christians fall short of living godly lives, the ultimate reality is that Jesus Christ is the Son of God who died for our sins, rose from the dead, and will one day return in judgment. Those who reject Him will be sentenced to the lake of fire, but those who accept His gracious offer of salvation will be forgiven and dwell with Him eternally. That is not a message of hate; it’s the message of ultimate love.