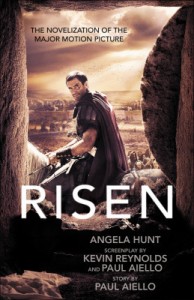 Risen, a novel by Angela Hunt based on the movie.

As someone who grew up on the original Star Wars trilogy, it is difficult to have not felt nostalgic over the past two weeks as The Force Awakens (Episode 7) has been shattering nearly every box office record. Yes, I’m aware of the unbiblical philosophies promoted in Star Wars, but those discussions are for another time. As eager as I was to watch the new Star Wars film, I am far more excited about a movie slated to be released next month since it deals directly with the most important subjects in history: the Crucifixion and Resurrection of Jesus Christ.

Starring Joseph Fiennes (Martin Luther in the 2003 film, Luther) and Tom Felton (Draco Malfoy in the Harry Potter series), Risen follows a Roman tribune named Clavius who is given a unique charge by Pontius Pilate: locate the body of Jesus to prevent more unrest in Jerusalem.

Check out the second trailer from the film. (The earlier previews had January 22 as the release date, but that has since been pushed back to February 19.)

I have not had the opportunity to preview the film, so I’ve done the next best thing—read the novel based on the story and screenplay of the movie. My review here will be based on the book, but it will necessarily be limited to avoid giving away spoilers.

Written in the first person point of view and spanning just over 300 pages, the novel follows two individuals: the aforementioned tribune Clavius and a Jewish widow named Rachel. Obviously, the book is historical fiction, meaning that it wraps fictitious people and/or events in with real people and events. In this case, the book (and movie) is intended give a different perspective on the Resurrection of Jesus Christ by showing it through the eyes of an unbeliever, Clavius.

This also means that artistic license will be used. Author Angela Hunt does a great job of weaving the biblical events surrounding Christ’s Crucifixion and Resurrection into this retelling. Clavius (Fiennes) is an ambitious soldier, and early on he puts down a Zealot revolt led by Barabbas, the infamous thief and murderer Pilate released at the crowd’s request instead of Jesus. Later that day, Clavius is sent by Pilate to make sure the three people crucified that day were killed before sunset so as to not upset Jewish sensitivities. When he arrives, it is clear that the man in the middle, Jesus (called Yeshua in the novel), is already dead. Clavius orders a soldier to pierce Jesus to make sure.

Two days later, Clavius is summoned by Pilate and told that the Jewish leaders claim the man’s disciples had stolen the body of Jesus and are declaring that Jesus has risen from the dead. Clavius and his new assistant, a beneficiarii named Lucius (Felton), embark on an investigation that takes them in and around Jerusalem over the next several days interviewing witnesses and tracking down the disciples.

The character of Rachel was apparently cut from the movie but is a major character in the book. Hunt stated that she was a creation of Paul Aiello, co-screenwriter for the film. She adds much to the cultural and historical background of the story, particularly as it relates to the Jewish people and the Old Testament. She also provides some depth to the character of Clavius. Despite her strengths, I don’t think I will miss her in the film. She’s a sympathetic character that works well in a book, but is probably unnecessary due to the pacing of what I expect to see in the movie.

I really enjoyed many of the tie-ins Hunt made with historical figures. Readers will likely be fascinated by the connection she makes between Matthew 27:52–53 with a couple of individuals we are introduced to in Luke 2. The discovery of Christ’s betrayer also gives some helpful insights into what might have happened after Judas hanged himself. 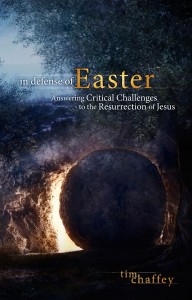 My book on the Resurrection, In Defense of Easter, details the overwhelming evidence for the Resurrection and critiques the alternative theories concocted by skeptics and critics over the past 2000 years.

As an apologist who has studied and written much on the Resurrection, including In Defense of Easter, I was very interested to see how the book handled the topic. I was not disappointed, even though I think the apologetics could have been a bit stronger. The same is true with the presentation of the gospel. However, one of the strong points of the story is that Clavius must investigate the evidence for the Resurrection. He knows Jesus was truly dead (he made sure), and he knows the tomb really was empty. He must come face-to-face with the only conclusion an honest investigation can yield. He cannot simply deny or ignore the issue as so many skeptics do today. They often dismiss the Resurrection as a legend or myth while many critical scholars claim that the Resurrection is based on the hallucination(s) of a grieving disciple. Yet these approaches do not come close to adequately accounting for the tremendous amount of evidence that even the vast majority of critical scholars accept.

I noticed a few points where the story does not get the biblical account exactly right, so I was thankful to see that Hunt acknowledged a couple of these in her “Author’s Note” section at the end of the book. To avoid spoilers, I’ll refrain from spelling these out until I have the opportunity to review the movie.

Some readers may be concerned with what looks like a nod to the Shroud of Turin in the preview. While I can’t say what the film will show other than the brief glimpse seen in the trailer, the book spoke of that particular cloth with the image as being a square cloth, presumably the one wrapped about the Lord’s face in burial mentioned in John 20:7. So the book isn’t making a case for the Shroud. For more information on the Shroud of Turin and why it should not necessarily be written off so quickly, see my post, The Ever-Intriguing Shroud of Turin.

Overall, I really enjoyed the book. It certainly added to my interest in the movie. I would recommend it for believers and unbelievers alike, teenagers on up. Parents should know that Rachel and Clavius are involved in an affair for part of the book. The author handles the intimate moments carefully, but it still may be more than what some parents are comfortable allowing their kids to read.