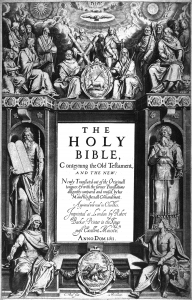 Title page from the original 1611 King James Version of the Bible.

The first Bible I ever owned was a King James Version that my parents gave me when I was about seven years old. I used it until I received a newer translation in my teenage years. Then in 2000–2001 I used the King James as my primary Bible again. It is one of many translations I have read all the way through, along with the NASB, NKJV, NIV (1984 and 2011), NET, ESV, HCSB, and the Lexham English Bible. I usually read a new translation each year, although I’ve repeated some of them, because I believe there is tremendous value in reading Scripture and discovering how translators have handled certain passages.

I have found strengths and weaknesses in each of the versions I’ve read, but there is one issue that frequently arises that needs to be addressed: the King James Only position. I have spoken with many people who believe the KJV is the only translation of Scripture we should use today. They often refer to it as the KJB, since they consider the King James to be the only Bible, and they don’t really consider the other translations to be legitimate versions. Proponents of this view will often attack fellow believers for using modern versions, which are often said to be based on Alexandrian texts and regularly called New Age Bible translations.

This view is to be distinguished from what has been called “Only King James” or “King James Preferred.” Those who hold these views might be uncomfortable using any version other than the King James, but they do not make a habit of ridiculing, admonishing, or condemning those who use other translations. I have a very good friend who has adopted this position, and I have no problem at all with someone preferring the King James over other versions. It’s a great translation, and God has used it to reach and teach millions of people over the past four centuries.

Years ago, I gave a talk on alleged Bible contradictions in which I showed two verses in the NKJV that are at odds (2 Kings 8:26 and 2 Chronicles 22:2—was Ahaziah 22 or 42 years old when he became king?). This seems to be a classic “typo” made by a scribe somewhere along the way, and it seems rather obvious that he was 22 when he became king. If he were 42, then he would have been older than his father, Ahab. A little while after the talk, an angry woman approached and told me that had she been in there she would have immediately pulled her high school son out because the King James has the same figures in these verses as the NKJV, and I was attacking Scripture. In reality, my talk was all about defending Scripture and showing how to address alleged Bible contradictions. The next day of the conference, she handed me a copy of an attempt to reconcile the two figures by Peter Ruckman, a King James Onlyist (KJO) who utilized some of the most contorted interpretations I have ever read in an effort to save the idea that the King James Version is inerrant. Many similar experiences could be shared. (I’ll talk more about Mr. Ruckman in part 3 of this series.)

This post should not be viewed as an attack on the King James translation, although KJOs will undoubtedly see it as such. As mentioned before, I have read through the King James Version, and I greatly appreciate it. But I do have five sincere and pointed questions I would like to ask KJOs. So in a spirit of gentleness, I ask these questions because I would like for those who have adopted that position to think carefully about their own view and the claims many have made about other translations.

Question 1: Where does the Bible ever teach that the King James Bible would be the version through which God would preserve His Word?

Readers of this blog know that I strongly believe the Bible is the inspired, authoritative, inerrant, and infallible word of God. But the doctrine of inerrancy is usually defined as applying to the original manuscripts, and it only extends to the copies and translations insofar as they accurately represent the original documents.

Did God Promise to Preserve His Word?

A common response in the literature of KJOs is to cite Psalm 12:6–7.

“The words of the Lord are pure words, like silver tried in a furnace of earth, purified seven times. You shall keep them, O Lord, You shall preserve them from this generation forever.” 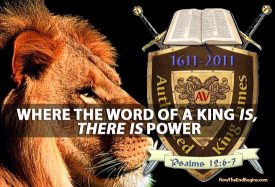 This image proudly uses the quote from Ecclesiastes 8:4 and references Psalm 12:6–7, both of which are misused in defense of the KJV Only position. (Image from Now the End Begins website)

Even if these verses are referring to God preserving His word, where does it say that He would do this only in an English Bible translated 2600 years after this psalm was written by David? It doesn’t, so this passage does not answer the question because it says nothing about the King James Bible. Also, if the KJO interpretation is correct, then wouldn’t this also mean that God was lying since He apparently did not preserve His word from sometime soon after the New Testament was composed until the KJV was translated?

But there is a bigger problem with this response. Not only does it say nothing about the King James, the preservation referred to here is almost certainly not about the Lord’s words, even though that’s how it appears in English. The problem is that English doesn’t have gender for words as do many other languages, like Hebrew. When the text states that God will preserve “them” it uses a masculine pronoun, so it refers back to a masculine noun. The “words” that are “pure words” in verse 6 are feminine in Hebrew, so “them” does not refer to the Lord’s words. Instead, “them” refers back to verse 5: “‘For the oppression of the poor (masculine), for the sighing of the needy (masculine), now I will arise,” says the Lord; ‘I will set him in the safety for which he (masculine, obviously) yearns.’”

The Word of the King Is Powerful

Another response from KJOs to this question is to cite Ecclesiastes 8:4, which states, “Where the word of a king is, there is power; and who may say to him, ‘What are you doing?’”

It should be rather obvious that this verse has nothing to do with the alleged superiority of the King James Version over other translations. The writer is simply saying that that a citizen should obey his king. Verse 2 states, “Keep the king’s commandment for the sake of your oath to God.” And verse 5 states, “He who keeps his command will experience nothing harmful…” To employ this verse in defense of the KJO position is to abuse and twist Scripture by yanking a verse so far out of its context to make it mean something that no one would ever see without KJO-colored glasses. Besides, if another king commissioned the translation of the Bible, would we then need to view that one as the “Authorized Version”? King Henry VIII authorized the Great Bible (1539) by Myles Coverdale. If we use Ecclesiastes 8:4 as some KJOs do, then perhaps the Great Bible should be viewed as the Authorized Version.

So the answer to the first question is that the Bible never tells us that God would provide the world with an infallible English Bible, let alone a particular version published in 1611. So those who hold this position must base their arguments on something outside of Scripture. Most of the time, it comes down to one’s preference or what they’ve been taught. Essentially, KJOs have put their opinion or preference about Scripture on the same level as Scripture. But there is another approach—KJOs will claim that all the newer Bibles have errors in them, so we need to stick with the King James. This leads naturally to the next three questions:

I understand that this topic can be quite sensitive and I will do my best to be kind in my questioning and explanations. If you plan to reply to this series of posts, please be sure to read all three posts and keep it civil. Thanks for reading!