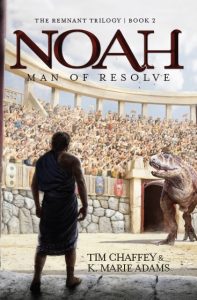 The cover of Noah: Man of Resolve has garnered some publicity. The book is now available.

Just in time for summer, the second installment of the Remnant Trilogy, Noah: Man of Resolve, has hit the shelves. The book’s cover has already made quite a splash (more on that later in the post).

The first book in this historical fiction series, Noah: Man of Destiny, has received some enthusiastic praise from readers. Here are a few details to get you up to speed for book two (you can read my blog post on book one here). Essentially serving as the official backstory for Noah, as portrayed at the Ark Encounter, the novel is a coming-of-age adventure about Noah as he sets out on his own to become a shipbuilder’s apprentice. Readers get a rather detailed look at what the pre-Flood world may have been like before it became exceedingly wicked. Loaded with action, adventure, and a bit of romance, we see Noah stand for truth and overcome temptation as he learns about a vile religious system bent on twisting the Creator’s message.

The first book concludes with roughly 40 pages of non-fiction material designed to help the reader discern between what details are right from Scripture and which parts are just story. A unique section (“Encounter This”) lets readers know where some of the items described in the book can be viewed on the modern Ark in Williamstown, KY.

So let’s take a look at book 2 and address some questions you may have about it.

What is the plot?

The second book picks up right where the first one ended. After returning home from Havil, the people of Iri Geshem, the city where Noah lives, receive some unexpected guests. This visit sets in motion a chain of events marked by tragedy, eventually leading Noah and Emzara to the point where they must decide whether they are willing to risk their lives for what they know to be true. The story eventually fast forwards about 450 years, and we see the impact that Havil’s evil religion has had on the world. Being outspoken and righteous, Noah is now a marked man, and it isn’t long before the enemy tries to destroy him.

How much of the story is from Scripture? 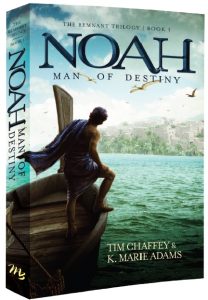 As with the first book in the series, the vast majority of the novel is fiction we developed based on ideas drawn from Scripture. It might be fair to classify this series as speculative historical fiction. The Bible has very little to say about Noah’s life prior to the time God called him to build the Ark. Since we know how he will end up, we have taken those few details about Noah’s early life and speculated about what it would take for him to develop into the righteous man we read about in Scripture. We placed him in the world described in the Bible’s first six chapters and get to watch him mature in that world. Many other characters mentioned in these chapters appear in the books, as do some of the events.

Also, just like the first book, this novel lines up with the backstory I developed for Noah at the Ark Encounter theme park in Williamstown, Kentucky. Visitors to the Ark will have the opportunity to see many of the items and scenes from the book in various Ark exhibits (see the Encounter This section for details).

With so much artistic license being used, is there a danger that people will think some of the ideas you developed for the story are actually from Scripture?

I addressed a similar question in my blog post about the first book in the series. There is certainly a danger that a reader will confuse story with Scripture, but we have taken several steps to limit these risks. We tell our readers at the start of the novel that much of what they are reading is artistic license, encouraging them to compare everything with Scripture. Also, just as we did in the first book, we included about 40 pages of non-fiction in the back of the book to answer questions that may arise as one reads and to point out what is story and what is biblical. Finally, we strive to not contradict biblical teaching at any point.

Why did you mention that the book’s cover has already created a splash?

The cover image of the book shows Noah entering a large arena to face a monstrous beast known as a carnotaurus. Some atheist bloggers and even Yahoo news in Australia posted brief articles to make fun of the cover because it advances the idea that Noah (and people in general) lived at the same time as dinosaurs. I’ll happily take the free publicity.

Besides the fact that these folks ignore a wealth of historical, petroglyphic, and pictographic evidence for humans and dinosaurs living at the same time, they have made two obvious blunders when discussing the cover image. First, they call the dinosaur a T-Rex, but the creature obviously has large horns on its head, which was a feature of the carnotaurus. (Update on 6/23/17: the Huffington Post ran an article in their “Weird News” section that properly identified the creature as a carnotaurus.) Second, Noah is not carrying any weapons or wearing any armor, so it hardly looks as if he is a gladiator getting ready to fight the beast as these bloggers claim. I don’t want to give any spoilers here, but based on what I’ve heard from a couple of reviewers so far, this scene was anything but a disappointment.

What can readers expect in the final book in the Remnant Trilogy and when will it be available?

Readers can expect book three to live up to the standard set by the first two. There will be more action, more adventure, and unfortunately, some more heartbreak as the world races toward the judgment of the global Flood. Loose ends from the first two books will be tied up, and Noah will build the Ark (that shouldn’t be a spoiler). We expect to have the third book ready before summer 2018.

Where can I get a copy of Noah: Man of Resolve?

You can get your copy of this novel and the first one from my online store. They are also available from booksellers everywhere, including Answers in Genesis, Amazon (print or Kindle) and New Leaf Press. If you order a copy and enjoy it, would you kindly consider leaving a positive review for it on Amazon? You can also receive updates by following my author page on Facebook and my coauthor’s page.