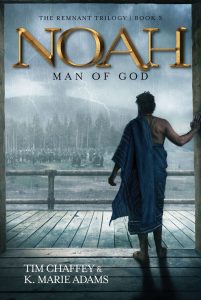 Noah: Man of God delivers an exciting conclusion to the Remnant Trilogy.

I am very pleased to announce that the final installment of the Remnant Trilogy is now available. Although it has absorbed much of my free time over the past 2.5 years, this series has been a lot of fun to develop, and I’m thrilled that readers can now enjoy the entire story.

The final volume, Noah: Man of God, picks up right where the second novel ended and ties together all the story lines and loose ends from the first two books. As I started writing this one, I was a bit concerned that it wouldn’t be as strong as the second book, which I anticipated would be my favorite because of all the action in the second half. I knew the third book would have plenty of action and adventure in the beginning and at the end, but I feared that the middle chapters would bog down a little. However, I was pleasantly surprised that these chapters turned out to be far stronger than I anticipated. There are numerous payoffs from the first two books, and I’ve already had a few readers tell me how much they enjoyed the middle section. We also added a few exciting chapters of an adventure-filled subplot and some special surprises in the final third of the book. Certainly, my opinion is rather biased, but at this point, I would have to say that the latest book is my favorite one in the series.

What is this one about?

The third book starts immediately after the close of the second book. Noah must find a way to escape the impending battle over Iri Geshem between the Nodites and Havilites before reuniting with Emzara. He’ll also need to gather a crew to help him build the Ark that the Lord first mentioned to him near the end of the second book. As public enemy number one (in the minds of Havilah’s rulers), he must also find a safe location to the build the Ark. Plenty of surprises await Noah and the reader in this story that spans Noah’s last century before the Flood.

How much of this story comes from Scripture?

Since the Bible gives very few details about Noah’s life prior to the Flood, we used artistic license while fleshing out his story. However, the third volume has the least amount of artistic license in the series since it covers a time period the Bible tells us more about. Obviously, Noah and his family working on the Ark and taking care of the animals come right from Scripture. And just like we did in the first two books, we included a nonfiction section to address questions about the pre-Flood world.

Also, since this series is essentially the official backstory for Noah’s family at the Ark Encounter and since it covers the years immediately before the Flood, there are plenty of items and events from the series depicted in the Ark. The “Encounter This” section is more than twice as long in this book than it is in the others.

Why would anyone read a novel about Noah when you can just read the Bible?

Perhaps it is not surprising that I’ve heard comments similar to this on a number of occasions. I see the same types of comments directed toward people who make films about biblical people and events. I certainly don’t want to discourage anyone from faithfully studying the Bible. If they do that regularly and don’t see a need to read or watch someone else’s portrayal of biblical people and events, then I have no problem with that. However, it can be quite helpful to see a biblical event portrayed (in print or on film) because it can help us detect areas where we haven’t paid close enough attention to the biblical text. Perhaps the book or film will depict a certain person or event differently than we have thought about it while reading the Bible. And sometimes, when we go back to study it, we realize that the reason it was different is because we automatically filled in details that weren’t found in the text. Thus, if we compare all that we read or watch with Scripture, a novel or movie can help us become more acquainted with the biblical text. 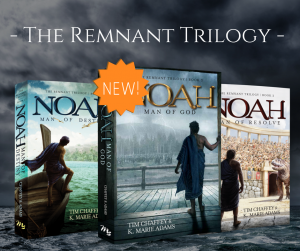 The Remnant Trilogy gives readers an imaginative and immersive journey through the pre-Flood world to discover what people and events may have shaped Noah into the faithful Ark-builder.

Another benefit can come from learning about the insights that others have discovered as they study the Bible. For example, it has been my job for over five years now to focus on and write about Noah, his family, the Ark, the Flood, and the world before the Flood. Who else gets to do this? There may be a few insights I can share that most folks have never considered. We often trust our pastors to teach us about the Bible. While authors are not necessarily pastors (some are, and I have been), they often study a particular topic in great detail, so there may be much to learn.

Finally, some people enjoy reading stories, so why not give them the option to read something that can help them grow in their understanding of who God is and what His Word teaches? That really was the goal of this series. Through the use of nonfiction sections and by challenging many of the stereotypical views of Noah that aren’t found in Scripture, we encourage our readers to dig into the Bible to see what it truly says.

What is your favorite scene in this book? The series?

It’s difficult to decide on a favorite scene in Noah: Man of God. There are two specific scenes that a couple of people have talked to me about already that are clearly in the running for my favorite. Without giving away spoilers, I will just say that both scenes have to do with dangerous creatures—one has to do with our hero and the other with his enemy. There are two other scenes that rank right up there for me. One has to do with Noah discovering something special about the place where he will eventually build the Ark, and the other one involves an action sequence with one of the women who will be on the Ark.

Picking a favorite scene from the series should be easy for me. Before writing the series, I knew I was going to include the arena scene shown on the cover of the second book. I figured it would be my favorite since it has so many things that interest me, and it is full of action. So I think I would probably pick this scene as the one I enjoyed the most. But the chapter that impacted me the most is found earlier in the second book. Writing a heart-wrenching scene where Noah’s life is rocked by tragedy was hard enough to write, but it was so much harder seeing Noah deal with his wife’s torment as well as his own grief. Because I try to put myself in the character’s shoes as I write each scene, it was extremely difficult to imagine what it would have been like to go through such tragedy. I’m not ashamed to admit that I used quite a few tissues that night and had some scratchy eyes the next day.

Why didn’t you take the story further into Noah’s life?

[MINOR SPOILER ALERT!] A couple of people have already asked me why we ended the story where we did, and someone told me that he really hoped we would cover the next year in Noah’s life. We decided to close the story at the start of the Flood with Noah and his family safely aboard the Ark. I think it’s natural for readers to want to see what we think life on the Ark might have been like, but frankly, I think a few chapters of that would get rather boring and would be anticlimactic. It’s amazing to walk through the Ark Encounter and observe what life may have been like and to see what the Ark’s systems may have been like. But reading about such things at the tail end of an adventure series would get old quick. The natural place to end the story was at the moment Noah’s faith in God was vindicated.

Are there any plans to add to the Remnant Trilogy?

Not at this time. Actually, we did leave some wiggle room for adding to it at some point down the road, but we certainly have no plans to do this at the moment. If we did do something, it would probably involve an adventure briefly hinted at in the second book that took place during the 450-year jump from Noah’s younger years to his 500th year.

Are you working on any other novels?

I’m currently finishing up a nonfiction book that I hope will be the most thorough study of an intriguing and controversial topic from the early chapters of Genesis. I’ve been working on it for several years, but the Remnant Trilogy forced me to put it on hold a number of times. I’m over 80% of the way through it, so I hope to finish by the end of the summer.

As for fiction, I have a few ideas in mind. Fans of my Truth Chronicles series have been asking for books 7–9, but I’ve been reluctant to work on that. I’m not completely satisfied with a potential story line, and the sixth book ended so perfectly that I don’t know if it would be wise to go beyond that. But I haven’t ruled it out, and it would be fun to hang out with Jax, Izzy, JT, and Micky again.

I’ve been kicking around doing a similar series with teenagers and using manga art again, but the books would probably be significantly longer and geared for a slightly older audience. Finally, I’ve been compiling notes over the past several years for a sci-fi series that I would love to publish someday, but it would be quite different than anything I’ve done so far, particularly since it would be from an unbeliever’s point of view.

I’ll keep readers posted on these projects as they are developed further.

Where can I get a copy of the Remnant Trilogy?

The books are available just about any place books are sold. They can be found online at my web store, Answers in Genesis, Master Books, Amazon, and ChristianBook.com.