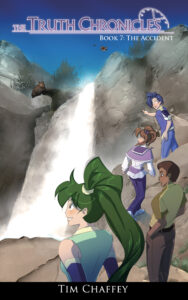 The cover image of Book 7: The Accident shows the teens in Yosemite Valley.

Some of you may have noticed that my blog and store sites were down for a couple of weeks last month. This was due to technical issues related to migrating the sites to a new server. I believe all the bugs are worked out now. Thankfully, the store is operational again because I will soon be able to offer the final three books in The Truth Chronicles series.

Jax, JT, Izzy, and Micky are back for another exciting time travel adventure near the end of their senior year of high school. With a good mix of familiar characters and some fresh faces, these books will take readers on another thrilling journey with the same blend of fun, laughter, danger, dinosaurs, and apologetics as the first six books in the series. And of course, The Truth Chronicles would never be the same without the amazing artwork of Inkhana. Fans of her art will enjoy a whole new set of illustrations, and I have to say that the front and back covers of book 8 are terrific.

I always find it difficult to summarize my novels because I don’t want to give away any spoilers while still sharing enough of the plot to make it interesting. So here goes.

As readers may recall, books 1–3 followed the teens during their sophomore year on a time travel adventure based on inventions for their school’s science fair. Books 4–6 took us on another adventure during their junior year, and this one also involved their science fair projects. Books 7–9 also follow a similar pattern during the teens’ senior year.

The students visit Yosemite Valley on their final field trip and have some hilarious moments testing out their new projects. Some familiar minor characters from the earlier books feature more prominently in book 7, and readers will meet another fun character before the adventure really takes off. Also, Jax and his friends rely on another expert whose work will address some of the apologetic issues covered in this trilogy.

Like the previous books, the teens end up taking an exciting adventure in the past. However, this one was unplanned and the danger is amped way up, both in terms of the creatures they encounter and the risk of accidentally altering the past and their present. Huge surprises await the teens as the story reaches its thrilling climax.

Jax and JT have always been the two primary characters, but in books 4–6 we spent some more time exploring Micky’s story. Books 7–9 will round things out by focusing a little more on Izzy.

Speaking of apologetics, these books maintain a healthy dose of defending the truth of Scripture, although the focus shifts a little. The bulk of apologetic issues covered in the first six books had to do with the creation/evolution and age of the earth debate. While there is still some of this in these books, the primary apologetic issues here relate to answering skeptical claims about Jesus Christ.

What Took You So Long?

It’s been nearly seven years since book 6 was published in 2014, why did I wait so long to write three more? Well, let me give you three reasons. 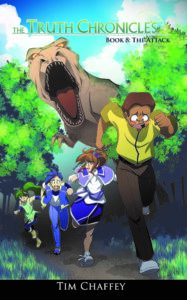 Book 8: The Attack is action packed and has my favorite front and back cover images.

First, I’ve had the privilege of being part of the team that made the exhibits for the Ark Encounter. This kept me very busy from 2014–2016 while the Ark was being built. Once it was finished, I spent much of my free time writing The Remnant Trilogy, my historical fiction series about Noah. Then in 2019, I finally completed my nearly 500-page nonfiction book, Fallen: The Sons of God and the Nephilim.

Second, I wasn’t sure if I wanted to write three more books in the series. While I thought it would be fun to give the teens another adventure and let them graduate high school, I was so pleased with the ending of book 6 that I didn’t want to do anything that might be seen as a letdown from such a perfect conclusion to the series, if it truly were the conclusion. This leads to the next reason.

Third, while working on all those other projects, I had not spent enough time developing a worthy story for this final adventure. I had about half of it figured out early on, but I was never quite satisfied with the rest. That all changed last summer when I started doing some serious brainstorming and figured out the missing pieces. The extra time really paid off. I think books 7–9 are the strongest in the series and well worth the wait.

When and Where Can the Books Be Purchased?

They will also soon be available at my store and at Answers in Genesis.