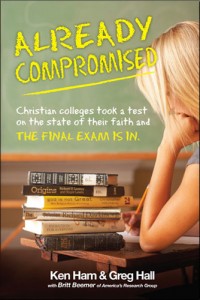 This important new book highlights some of the ways Christian colleges and universities are undermining the Christian faith and sending mixed messages to students and their parents.

Disclaimer: This book was co-authored by Ken Ham, the president of Answers in Genesis. I am an employee of this ministry and helped edit one of the chapters. While I will do my best to be objective, I admit I am biased.

I was excited to read this book from the time I had first heard about it in one of our morning staff meetings. Already Compromised is sort of a sequel to Ken Ham’s and Britt Beemer’s earlier collaboration entitled Already Gone, which highlighted many of the reasons why young people are leaving the church in droves. Both books utilized extensive polling research conducted by America’s Research Group.

Survey questionnaires were delivered to 200 Christian colleges. The goal of the research team was to survey the president, vice-president, head of the Bible department, and head of the science department at each school. In the end, out of a possible 800 responses, 312 surveys were returned. The questionnaires included questions such as the following:

There were many other questions included in the survey. Oftentimes, the same question was asked in the opposite manner. This exposed some of the many inconsistencies that exist in some of these schools.

How does one make sense of this data? How can Christian college presidents claim almost unanimously to believe in the inspiration of Scripture (the biblical definition of inspiration is that it was literally breathed out by God), yet only about 1 in 5 claim to believe in inerrancy of Scripture and about 1 in 6 believe in the infallibility of Scripture? These numbers, along with the other portions of the survey reveal that there is a severe problem at many of our Christian colleges and universities.

Besides the statistics, there are some other strengths in this book. The discussion on worldviews will be helpful to people who are not well-versed in this battle. There is also a helpful section addressing young people who are preparing to go to college encouraging them to remain strong in their faith and to be ready for the attacks on their faith that will inevitably come (even from within Christian colleges). The appendix which critiques the Documentary Hypothesis also contains excellent information for students and parents alike. This view has been successfully debunked numerous times, but it keeps popping up in Christian academia so it needs to be dealt with. (And since I helped edit this chapter, it is obviously the best one.)  🙂

In case you are wondering, the authors do not “name names” when it comes to the various schools. You will not find a list telling you to stay away from _____ Christian College. However, in one of the appendices, the authors do address some of the public statements made by professors at a handful of these colleges. This is beneficial because students and their parents need to realize what is accepted at these schools which claim to stand for God’s Word.

Like most other books in their first printing, there are a couple of typos and one of the charts (out of a few dozen) does not match the text (two numbers were switched around). Consequently, I wasn’t sure which information was accurate, but I went with the text because the data was given twice there.

Of course, not every aspect of this widespread compromise could be covered in this book—it would have been much, much longer. However, with the research presented in Already Compromised, it would be great to see someone follow up with some ideas on how church leaders can utilize this information. After all, they are the ones at the grass roots level responsible for equipping their congregations with this information.

It would also be nice to see someone expand on the chapter that specifically addressed students. There is some great advice in the chapter, but the limitations of space necessarily prevent every idea from being discussed. Here are just a couple of ideas I had that could be explored by others (or maybe in a future work). How can students who are concerned about this problem in their own Christian college get involved in responding to this compromise? While they need to be respectful to their professors (and this is pointed out in the book), they could lead study groups in their schools to teach the truth of God’s Word. Someone may want to write about some helpful tips in doing this. Another thing we can do is encourage some students to study hard to someday become professors (if it is in accordance with God’s will for their lives) so that they can help turn the tide. These are just a couple of ways that students can help reach the next generation with the truth.

Overall, I think Already Compromised is an extremely important book for Christians to read, especially if you are a pastor, a student who is in or will soon be choosing a college, or a parent of one of these students. The information contained in the book is vital and the authors spend some time helping the parent learn how to ask penetrating questions to school administrators so that they can learn where the school really stands on these important issues. The “institution questionnaire” at the end of the book, put together by Bodie Hodge, is designed to do just that.