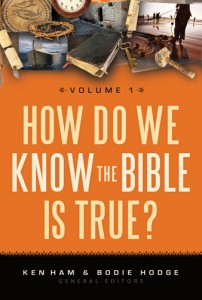 Here's a brand new apologetics book that I contributed to by writing three chapters and editing most of the others. It also includes chapters from John MacArthur and Ken Ham.

It was a real privilege for me to work on this new apologetics book, especially since there are chapters from two Christian leaders that I really look up to (John MacArthur and Ken Ham). Ken Ham and Bodie Hodge served as the general editors and I had the opportunity to check and edit the content of nearly every chapter.

This 300-page book is the first volume in what is scheduled to be a four-volume set. Each book will address 20–30 of some of the biggest questions that people have about the Bible, the biblical worldview, and science. The book is designed with the average reader in mind so the technical jargon is kept to a minimum.

The three chapters I wrote dealt with the following issues: How Should We Interpret the Bible? (with special attention to Genesis 1—11); What About the Factual Claims in The da Vinci Code?; The Framework Hypothesis (co-authored with Dr. Bob McCabe).

Here is a list of just some of the other topics covered in this first volume (along with the author of the chapter):

There are several more important subjects covered in this book dealing with many of the latest attacks on the Word of God. So besides the fact that this book deals with a large number of the most recent attacks, what makes it any different than most of the apologetics books on the market? How Do We Know the Bible Is True? approaches the issues from a presuppositional point of view, whereas most works on apologetics come from an evidentialist perspective. This doesn’t mean that we don’t provide any evidence for our positions; it means we start from the Bible and show why the evidence makes sense in light of Scripture and cannot be accounted for in a naturalistic, atheistic worldview.

Another huge difference between this book and most apologetics books is that we are not afraid to take a stand on a straightforward understanding of Genesis 1–11. Most apologists out there either avoid Genesis 1–11 like the plague or they actually promote views that contradict Genesis. God has revealed the true history of the world to us in His Word, and it is only when we are willing to trust Him in all areas that we can truly claim to have a biblical worldview.

Of course, I highly recommend this book. It is extremely important for Christians to be able to defend their faith.

So is it a perfect book? Well, it’s not as good as the Bible (and never will be). Also, I’ve already found a couple of typos that I missed during the editing process (even one in my own chapter, oops), which will be corrected in the next printing. So although it isn’t perfect, I would encourage you to pick up a copy at your earliest convenience.