↓
Home Menu ↓
Skip to primary content
Skip to secondary content
Home→Current Events→Ironman Triathlon—Well, Half of It (sort of) 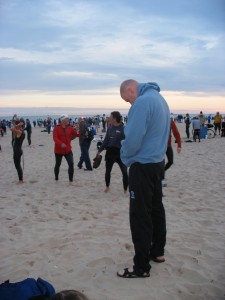 Praying before the race.

On Sunday August 19, I competed in my first half-Ironman triathlon as a member of a relay team. I took care of the 1.2 mile swim, my dad biked 56 miles, and my sister Holly ran the 13.1 miles to finish the race.

The Ironman triathlon is an incredible test of endurance, athleticism, and will power. I remember watching the coverage of the Ironman championship more than a decade ago, and I watched in admiration as athletes pressed their bodies to the limit, and sometimes even beyond the limit. It was very inspiring. Especially inspiring was the story of Dick Hoyt, who competed in these races while pulling, carrying, and pushing his quadriplegic son in the 2.4 mile swim, 112 mile bike, and 26.2 mile marathon.

The distances always seemed so absurd to me that I never dreamed of being a part of anything with the name Ironman attached to it. Some of my readers know that five years ago, I completed the Green Bay sprint triathlon, but the distances (400 yard swim, 15 mile bike, and 3 mile run/walk) do not even compare to the Ironman. I did that to meet my goal of completing a triathlon within a year of being diagnosed with leukemia.

Over the past ten months, I have been swimming at the local YMCA to get in shape. One night about two months ago, I had a lot of energy and ended up swimming over two miles—by far the most I’ve ever done. While I was swimming that night, I realized that the Ironman swim was just a little farther than what I was doing. When I got home, I decided to see if there was such a thing as an Ironman relay. Much to my surprise, they do allow relay teams in some of the half-Ironman races, and I found one that wasn’t too far away from the three of us. So I emailed my dad and sister to see if they were as crazy as me and would be interested in signing up.

So yesterday was the big day. After only three hours of sleep, due in part to a lousy hotel room/bed, a super noisy neighbor outside and then in the hall around midnight, an upset stomach, and nerves, I found myself on the beach at 7:00 AM getting ready to run into the water. I knew I could swim the whole distance in a pool, but the open water of Lake Michigan and its waves made me a little nervous.

My first goal was to finish the swim so that my dad and sister could participate (or else I’d owe them a good chunk of change to pay them back for the registration fees). My second goal was to finish in under 50 minutes, which I had only done twice in the pool. I really wanted to finish in under 45 minutes, but I knew I had never come close to that and was hoping the water current might give me the few extra minutes I needed. 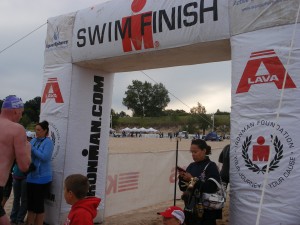 Just about to cross the finish line in my Ironman-issued purple swim cap. I may have been the only swimmer without goggles and was one of a handful without a wetsuit (they don’t make them big enough).

The swim course was marked by 18 large buoys: a large red one at the beginning and end, eight yellow buoys marking the first half, and eight orange buoys marking the second half. The first half of the race was a bit rough as I tried to get used to the waves, the many swimmers passing me (I did pass a few of them), and still battling an upset stomach. By the time I reached the halfway point, I was in a rhythm and was very confident that I would finish with a good time.

Rounding the final buoy was such a great feeling as I knew I only had about 100 yards left to swim to the shore. But that’s when the hard part started. Going from swimming for so long to running out of the water and up the beach to the transition area was pretty rough. It sounds silly, but when your legs get so used to kicking, it is pretty hard to start running, particularly in very soft sand.

When I saw my official time I was slightly disappointed: 54 minutes, 29 seconds. Then I realized that my time included 4 minutes and 19 seconds of transition time, and about 20–30 seconds of waiting to get in the water and getting out of the water to cross the timing checkpoint into the transition area. So my actual time in the water was just under 50 minutes. By no means is this a world class time (many of the top athletes were under 30 minutes), but I accomplished my first two goals and it gives me something to shoot for if I ever decide to do something like this again.

So our official times are as follows (numbers are rounded to nearest second): 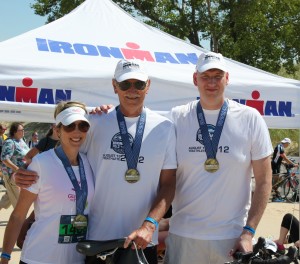 After the race with my dad and sister. I’m very proud of you guys!

I am very proud of my dad and sister—they did great. It was great to be a part of something like this with some of my family members and hope to do it again sometime. I thought of a quote from Stacey King, a former NBA teammate of Michael Jordan. He said, “I’ll always remember this as the night that Michael Jordan and I combined for 70 points.” Jordan scored 69 and King had 1. My dad and sister covered 69.1 miles and I did 1.2 of the total 70.3 miles.

One of the amazing things about these types of events is that it often brings out the best in people. Most of the spectators and other competitors are very encouraging to everyone else. Hundreds of volunteers give up their time and energy to make an event like this possible. It also gives people an opportunity to reunite with others. I had an opportunity to catch up with a friend from college who I hadn’t seen in over ten years.

I guess I’m technically not an Ironman since I just did one-third of a half-Ironman. So does that make me a one-sixth Ironman? Actually, it makes me grateful that God has given me an opportunity to be a part of this triathlon. It was a lot of fun and hard work, but I’m very happy that I did it.