↓
Home Menu ↓
Skip to primary content
Skip to secondary content
Home→Q & A→Q & A Series: Is There Such a Thing as a Carnal Christian?

I recently heard some fellow believers claim that there is no such thing as a carnal Christian. Someone also asked me recently what I thought about this particular issue and wondered if I had blogged about it before. Well, I haven’t written about it before, but these conversations indicated to me that I should.

So is it possible for a Christian to be “carnal”? For those unfamiliar with the term, carnal is defined in Merriam-Webster’s Dictionary (11th Collegiate Edition) in the following ways:

1a: relating to or given to crude bodily pleasures and appetites; 1b: marked by sexuality; 2: bodily, corporeal; 3a: temporal; 3b: worldly

In the New Testament, carnal is from the Greek root word sarx, and according to Louw-Nida’s Greek-English Lexicon, it refers to something “pertaining to behavior which is typical of human nature, but with special focus upon more base physical desires—‘worldly, base.’”

Those who claim that a Christian cannot be carnal might look at Romans 8:7, which states, “Because the carnal [sarkos] mind is enmity against God; for it is not subject to the law of God, nor indeed can be. So then, those who are in the flesh [sarki] cannot please God.” The contrast between walking in the flesh (sarx) and walking in the Spirit is also made sharp in Galatians 5:16–26. These seem like strong evidences against the idea of a carnal Christian, but there are a few problems with this conclusion.

First, the first eight verses of Romans 8 clearly contrast Christians (those who walk according to the Spirit) and non-Christians (those who walk according to the flesh and set their minds on the things of the flesh). So when Paul talks about fleshly-minded people in this chapter, he is specifically referring to unbelievers, and he is not necessarily dealing with the issue of whether or not a genuine believer can be carnal.

Second, in the previous chapter (Romans 7), Paul clearly states that he himself is “carnal, sold under sin” (v. 14). He goes on to describe over the course of several verses the constant battle that he waged every day against the flesh. The things he wanted to do (spiritual) he didn’t do, and the things he didn’t want to do (carnal) he did do. He knew he was saved, but recognized that as long as he was in a non-glorified body, he was going to struggle with carnal desires. He concluded this section with a plea: “O wretched man that I am! Who will deliver me from this body of death? I thank God—through Jesus Christ our Lord! So then, with the mind I myself serve the law of God, but with the flesh the law of sin” (vv. 24–25).

Third, Paul wrote several passages in Scripture to deal with believers who were carnal. So much of 1 Corinthians deals with this problem. Consider the following verses:

And I, brethren, could not speak to you as to spiritual people but as to carnal, as to babes in Christ…for you are still carnal. For where there are envy, strife, and divisions among you, are you not carnal and behaving like mere men? For when one says, “I am of Paul,” and another, “I am of Apollos,” are you not carnal? Who then is Paul, and who is Apollos, but ministers through whom you believed, as the Lord gave to each one? (1 Corinthians 3:1–5, NKJV)

Paul specifically identified some of the Corinthian believers as carnal Christians. He called them “brethren,” thus affirming their place in the body of Christ. 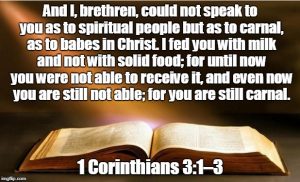 Later in the same chapter Paul mentioned that each believer will one day have their works tested by fire. Many Christians believe Paul also referred to this event as the “judgment seat of Christ” in 2 Corinthians 5:10. But here’s the relevant point for our study. He mentions that those who built on the foundation of Christ with gold, silver, and precious stones would be rewarded (1 Corinthians 3:14). On the other hand, those people who built on that foundation with wood, hay, and straw would see their works burned up—they would suffer a loss of reward, “but he himself will be saved, yet so as through fire” (1 Corinthians 3:13, 15). So there will be individuals whose works are not rewarded by Christ—they are burned up—but the individuals are still saved. So there are Christians whose lives do not always demonstrate their faith.

But Paul didn’t only say these kinds of things with the Corinthian believers; he said something similar to the Thessalonians who, for the most part, were a strong church:

But we command you, brethren, in the name of our Lord Jesus Christ, that you withdraw from every brother who walks disorderly and not according to the tradition which he received from us…For even when we were with you, we commanded you this: If anyone will not work, neither shall he eat. For we hear that there are some who walk among you in a disorderly manner, not working at all, but are busybodies…But as for you, brethren, do not grow weary in doing good. And if anyone does not obey our word in this epistle, note that person and do not keep company with him, that he may be ashamed. Yet do not count him as an enemy, but admonish him as a brother. (2 Thessalonians 3:6, 10–11, 13–15, NKJV)

Although Paul did not specifically use the word carnal in this passage, he described some people who were being lazy, disorderly, and disobedient, yet he told the believers to admonish such people “as a brother.” [As a side note, you rarely hear 2 Thessalonians 3:10 quoted by liberal Christians and those promoting the so-called “social gospel.”]

So the answer to the initial question is “Yes, there is such a thing as a carnal Christian.” But I do believe we need to qualify that statement a bit because of the discussion in Romans 8. It seems that Paul made a distinction between someone who was completely dedicated to the flesh without concern for spiritual matters and those who were true believers but were still struggling with carnal desires and behaviors.

In a sense, this is a matter of semantics, because I don’t think the two sides carefully define their terms (like carnal) when discussing the issue. There is a real danger in thinking that a Christian could not be carnal (at least at times). We are all saved by God’s grace alone, and this grace is received by faith alone. While it’s true, as James wrote, that faith without works is dead, it is also true that genuine believers struggle with sins and sometimes are ensnared in them.

To automatically assume that a professing Christian who is found to be involved in sinful behavior isn’t truly a believer is a terrible mistake. We’ve seen that on a few occasions, Paul called them “brethren” because he believed they were Christians. Instead, we should admonish this person as a brother, gently correcting him with the hope that he can be fully restored to fellowship with God’s people.

Thinking that a Christian cannot be engaged in carnal activity can almost lead to thinking that we are saved by our works, or at least that we keep ourselves saved by our works. We know this is absolutely false, and I know that my friends who have spoken against the idea of carnal Christians would never endorse salvation by works. But I’ve heard of people who were struggling with sin being told that they probably weren’t even Christians because of their actions. I think this is very sad. The very fact that the person admitted they were struggling to overcome a certain behavior likely shows that they are saved because the Holy Spirit is convicting them of their sin.

We need to remember that the Christian walk is a lifelong struggle against the flesh. We need to continually rely upon the Holy Spirit to help us overcome this battle with sinful desires. None of us have done this perfectly. If Paul was the chief of sinners, then I’m probably the emperor of sinners. While we never want to give the impression that we are condoning sin, we must also be sensitive toward fellow believers who are struggling with it, rather than instantly assuming they aren’t brothers. Just as God has shown us His tremendous, unfathomable grace, we need to learn to show grace to others as well—even to those carnal Christians who are out there.

Finally, I don’t want to give the impression that everyone who calls himself a Christian really is one. Polls have shown that over 70% of Americans claim to be Christians, but I think most people would be shocked if the actual number of true believers were anywhere near that percentage. God is the ultimate Judge of one’s heart, but the Bible also tells us that we can recognize true believers by the “fruit” of their lives (Luke 6:43–45; John 15:5). If someone professes Christ but his life does not give any evidence of being a new creation, and he does not respond appropriately to proper Christian discipline, then he may not be a genuine believer at all.

So while there really are some “carnal Christians” (saved individuals who are engaged in sinful behaviors), there are also false converts (people who claim to be Christians but have never truly placed their faith in Christ alone). True believers must strive to be as much like Christ as possible so that unbelievers will see a good representation of who Jesus Christ is—the only One who can save them from their sins.