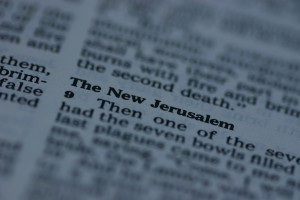 Genesis 7:1 is often misunderstood and misused by Christians seeking to address questions about the Ark and the Flood.

It’s been quite a while since my last blog post. This was anticipated, thanks to extended work hours as we prepare to open the Ark Encounter on July 7 and many late evenings working on my next book (to be announced very soon). This post is designed to address a comment I’ve heard from many well-meaning Christians that just doesn’t really make the best sense of Scripture.

As far as we know, the Ark had no built-in means of propulsion or steering. Noah wasn’t trying to go anywhere, since the whole world was underwater, so the Ark just needed to float and keep its passengers safe. Many Christians have offered a less-than-satisfactory response while responding to certain skeptical questions, such as the following: How could the Ark have avoided striking hazardous objects in the water? How could Noah’s family taken care of so many animals?

What is this unsatisfactory response? I have heard many Christians claim that we need to remember that God was in the Ark with Noah, because in Genesis 7:1 the Lord told Noah to come into the Ark. Therefore, God must have been in the Ark so Noah had nothing to worry about. Case closed, right? Um, not so much. Let’s take a closer look.

Look at how Genesis 7:1 is translated in three different English Bible versions and pay attention to the bold word in each.

And the LORD said unto Noah, Come thou and all thy house into the ark; for thee have I seen righteous before me in this generation. (KJV, bold added)

Then the LORD said to Noah, “Go into the ark, you and all your household, for I have seen that you are righteous before me in this generation. (ESV, bold added)

Then the LORD said to Noah, “Enter the ark, you and all your household, for you alone I have seen to be righteous before Me in this time. (NASB, bold added)

How could three English Bibles translate one little Hebrew word (bo’) differently? Many Christians will pick their favorite version, assuming that it translates the word properly and that the others must be wrong. But this is a rather poor approach to addressing issues like this one. A better practice would be to dig a little deeper to see what the word really means, which may help us understand why the versions translate the word differently.

In this particular case, all three words are acceptable translations of the Hebrew word. For example, the King James Version translates bo’ as “come” in Genesis 7:1, “go” in Genesis 11:31, and “enter” in Genesis 12:11. How are we to know which is the appropriate translation? Well, the word simply refers to a movement from one space to another, but it does not indicate where the one giving the command is located. As such, the context must determine whether to word should be understood as a command to “come,” “go,” or “enter.”

The safest translation keeps the instruction to move neutral with respect to the position of the one giving the command. In this case, “enter” works well since the text does not tell us where the Lord is in relation to Noah. “Enter” does not demand that the Lord to be inside or outside the Ark. So the New American Standard handles this well.

A couple of objections need to be addressed. First, I hope no one would consider making this argument, but I’ve seen worse so I’d like to head it off here. If you are considering citing Genesis 7:1 to claim that God was in the Ark so the word should be “come” then you are begging the question. The claim that God was in the Ark is based primarily on “come” being the correct translation, and yet that is the point you must prove.

Second, God is omnipresent, so of course He was in the Ark in a general sense. This is not the issue at hand. Yes, God is everywhere present at once, but this does not mean that God’s divine presence (manifesting as the Shekinah glory or as the Angel of the Lord) was in the Ark with Noah’s family during the Flood or just prior to the Flood when this instruction was given. Ironically, if one wants to use this argument to suggest that the word must be translated as “come” because God was in the Ark, then the argument backfires. Since God is omnipresent, then that means He was outside of the Ark, too, so “go” also fits perfectly.

Whenever questions arise about the rendering of a given word or phrase, it is important to check if something in the context of the passage that would help determine the proper translation. In this case, Genesis 8:1 argues quite strongly against the idea that God’s divine presence was in the Ark.

Then God remembered Noah, and every living thing, and all the animals that were with him in the ark. And God made a wind to pass over the earth, and the waters subsided. (Genesis 8:1, NKJV, italics added)

This doesn’t really look like the type of wording we would expect to find if God were in the Ark with Noah. Instead, the fact that God “remembered Noah” makes it pretty clear that He was not in the Ark.

To clarify, when the Bible states that “God remembered” Noah or anything else, it does not mean that He had forgotten something. It is often an expression of God’s faithfulness to a covenant He had made. He established a covenant with Noah in Genesis 6:18, guaranteeing the safety of Noah, his family, and the animals on the Ark. In Genesis 8:1, His faithfulness to keep that covenant is shown by the fact that He starts to bring the Flood to an end. See also the passages where God remembered Rachel (Genesis 30:22) or His covenants with Abraham, Isaac, Jacob (Exodus 2:24, 6:5; Leviticus 26:42), and the Israelites under Moses (Leviticus 26:45).

Genesis 8:1 marks an important turning point in the Flood narrative. Up until that point, the waters devastated the earth so that the first world perished. But beginning with 8:1, upon God’s remembrance of Noah, the Flood begins to assuage. Allen Ross stated, “To say ‘God remembered Noah’ is to say that God faithfully kept his promise to Noah by intervening to end the flood.”1

While it is a pleasing thought to consider God being in the Ark with Noah, the text of Scripture seems to suggest that He was not on board. As such, “enter” in Genesis 7:1 (NASB) makes good sense of the Hebrew text. This term avoids creating tension between Genesis 7:1 and 8:1 by not placing Him in the Ark, while still leaving open the possibility that He may have been there.

Finally, Christians should refrain from using this verse as the solution to issues about the Ark’s safety. Yes, God can work miracles, but the Bible gives us no indication that He performed some in regards to the Ark during the Flood. He gave Noah some specific instructions about the Ark, and then we are told that Noah did what God commanded (Genesis 6:22). It makes little sense to have God tell Noah to spend years building an Ark to certain specifications if God was just going to miraculously see them through the Flood anyway.