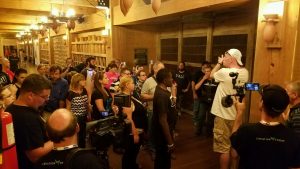 This picture was taken as I explained to the atheist group our approach to counting the number of animals required on the Ark and how we very likely overestimated the number.

The opening day of the Ark Encounter turned out to be far more memorable for me than I ever imagined. Some atheists planned to protest this exciting event at a nearby interstate off-ramp. I ended up having the distinct privilege of giving a group of about 20 of these atheists and agnostics a tour of the full-size Ark reconstruction in Williamstown, Kentucky.

As the content manager for this incredible attraction, I had been looking forward to July 7 for a long time because I wanted to see how people responded to the various exhibits. I also looked forward to getting some time off—in the days and nights leading up to opening, our team put in many long hours, and I was even hanging signs in the ticket booths until nearly 11:00 PM on July 6. I did not plan on returning to the site the next day, however, Eric Hovind asked me if I would be willing to deliver some food to the atheist protest. I agreed to do that, have a few conversations, and answer some questions for a little bit before heading home, but things turned out far better than I had planned.

There may have been about 70 protesters at the event, and based on my observations and conversations, I estimate that about half of them were friendly and open to discussing our differences in a civil manner while the other half seemed to be more interested in ridiculing the beliefs of Christians and spreading false information about the Kentucky Tourism Development Act.

Many of these folks have been misled to believe that the state of Kentucky had contributed millions of dollars to the construction of the Ark. In reality, not a single dollar of Kentucky tax money has gone to the Ark Encounter. The sales tax rebate at the heart of some of the controversy allows the Ark Encounter to receive 25% of the sales tax it collects from guests over the next ten years at the property up to a set amount, if the park meets certain benchmarks. 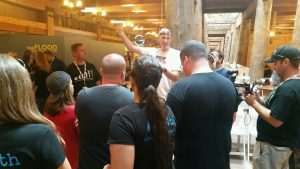 This photo shows part of our Q&A session on the third floor. I would love to have several hours of Q&A with a group like this someday.

Arrangements were made to take a group of the protesters on a tour of the Ark, and I was asked to lead them. Apart from one person who was a bit snarky for much of the tour, the group was respectful and seemed to enjoy their time on the Ark. They asked several questions along the way, and even agreed to a ten-minute Q&A session once we reached the third deck. The highlight for me was the opportunity to share the gospel of Jesus Christ’s sacrificial death, burial, and Resurrection. Some people in the group needed to leave following that session while others stuck around to walk through other exhibits and ask more questions.

I think it is safe to say that the Ark team successfully anticipated every question they asked since we had already written signage addressing every issue they raised. Here is a sampling of the questions they posed along with a brief answer and the place on the Ark where the answer can be found.

I truly enjoyed my time with this group of atheists and agnostics, and I believe most of them enjoyed the tour. Many of them thanked me for taking time with them, and a handful thanked me for treating them with respect. I was told that most Christians they had encountered had been rude and arrogant. I have witnessed Christians act this way toward atheists. Even at the protest there was a man who apparently thought he was fulfilling the Great Commission by shouting back at the more boisterous protesters.

It saddens me that some Christians act as if atheists and agnostics need to be shouted down and called names. Jesus commanded us to love one another (John 13:34), love our neighbor (Matthew 22:39), and love our enemies (Luke 6:27). If we truly desire to reach the lost with the soul-saving gospel message, we need to care about them and treat them with dignity. They are made in the image of God, and Jesus shed His blood on the Cross for them.

I am grateful for the opportunity to meet these people yesterday, and my prayer is that God would use the things they learned on the tour to soften their hearts so that they would ultimately come to trust in the Creator whose existence they currently deny.