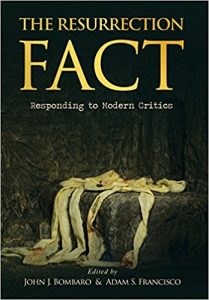 This helpful new resource refutes the claims of modern critics and skeptics.

There is no shortage of good books on the Resurrection of Jesus Christ. I have read many outstanding works on the topic, including books by Gary Habermas, N.T. Wright, and Mike Licona. Readers of this blog know that I am more passionate about this topic than any other, which is why I have written In Defense of Easter and produced several DVDs on the Resurrection: Risen Without a Doubt, He Is Risen, Shrouded in Mystery.

Since there are so many good resources on the subject, do we really need more books about it? What fresh insights or new angle can a researcher give us on the Resurrection that will make his or her work a worthwhile addition to our wealth of apologetic and theological resources in this area? Well, a new book written by a team of Lutheran scholars has provided the Christian community with another commendable volume on the Resurrection of Jesus Christ.

General editors, John J. Bombaro and Adam S. Francisco, have put together an impressive collection of scholarship designed to address the views promoted by many of the leading skeptics of the Resurrection in the past several years.

Following and introduction by Bombaro, the first chapter lays out many of the basic facts regarding Good Friday and Easter Sunday. Mark Pierson demonstrates that Jesus truly died on the Cross, and then briefly addresses some of the alleged contradictions in the Resurrection narratives in the Gospels. Perhaps the most unique portion of Pierson’s chapter is his critique of Robert Price’s claim that Jesus never existed. Pierson shows how Price relies upon a flawed expansion of the principle of double dissimilarity to support his view to the point that “nothing can be considered authentic about Jesus if it bears resemblance to virtually anything in the entire ancient Mediterranea world.” For example, Price denies Christ’s betrayal by Judas because Julius Caesar was also betrayed by a friend. By stretching this criteria to such an extreme limit, as Price has done, one could eliminate the historicity of nearly every single person and event in history.

In the second chapter, Francisco sets his sights on two of the leading culprits behind much of the skepticism regarding the historicity of the Bible, particularly its miracles: David Hume and Bart Ehrman. Hume essentially tried to show that miracles could never be demonstrated historically because they are rare and non-repeatable. However, as many others have shown, Hume’s argument proves too much, and if we were to consistently apply it, one could never view any rare event as historical. Francisco moves on to show how Ehrman has repeated many of Hume’s errors. In their efforts to deny the miraculous, Hume and Ehrman have not done the true work of historians. Instead, they have merely exposed their naturalistic philosophies that do not allow “miracle” as a valid explanation of an event.

The third chapter critiques the views of the Jesus Seminar cofounder, John Dominic Crossan. Bombaro shows how Crossan redefines the traditional understanding of the Resurrection to be little more than a parabolic narrative through which Christ’s followers derive purpose and meaning. Crossan has adapted the interpretive paradigm of structuralism (that all elements of human culture are only intelligible in terms of their relationship to a larger overarching structure) and applied it to the New Testament in an effort to understand why its writers would say what they did about Jesus. Unsurprisingly, Crossan’s antisupernaturalistic bias and flawed methodology (including the assumption of a so-called “Cross Gospel”) strip Jesus of divinity and power. By developing “another Jesus” to follow, Crossan has presents a false gospel based on false hope and a false messiah.

The fourth chapter is the most creative in the book. The arguments of the late atheistic philosopher Michael Martin are put on trial before a panel of esteemed judges: Gamaliel, Paul, Nicodemus, and Joseph of Arimathea. While the responses and questions from the judges are obviously fictitious, they are based on what we know of these individuals from Scripture. What comes through clearly in this rather entertaining exercise is Martin’s (and the same is true for many other skeptics) complete lack of objectivity and neglect of biblical and historical scholarship.

In the fifth chapter, Angus Menuge critiques the methodology promoted by atheist philosopher Matthew McCormick. Like other “new atheists,” McCormick defines faith as believing something “despite contrary or inadequate evidence.” Menuge shows how McCormick profoundly misunderstands the relationship between faith and evidence while demonstrating that McCormick’s own perspective is far from neutral. Also, McCormick’s biases are demonstrated in the way he mishandles the evidence and his willingness to accept a highly implausible naturalistic explanation of the post-Resurrection appearances.

Chapter six looks at an important issue that has arisen multiple times in church history. Did Jesus Christ physically rise from the dead in the same, though transformed, body that was buried in the tomb three days earlier? Jonathan Mumme takes on Dale Allison’s version of a spiritual resurrection of Christ. Mumme demonstrates that only a bodily resurrection makes sense in light of biblical and historical data. While Allison’s research on hallucinations, visions, etc. is interesting, these explanations fail to account for what people experienced when encountering the risen Savior. The chapter includes a helpful summary of N.T. Wright’s research into the ideas about the afterlife in and around Israel in the first century AD. He shows conclusively that Christianity’s teaching on the Resurrection was unique and did not copy its views on Christ’s Resurrection from any other system.

The seventh chapter stood out to me in that it approached the subject from a rather unique angle. By focusing on ancient myths, the authors, C.J. Armstrong and Andrew DeLoach, set out to demonstrate that “myth” need not equate to falsehood. In modern times, “myth” has often been used to refer to legendary morality tales or fanciful protology stories. However, this has not always been the case. They state that “myth is the story that is so significant to a people that it brings about narrative, art, and other means of telling the story of the event(s) at the center of the myth. We are therefore on surer ground when talking about myth when we accept the idea that myth points to a conviction of a people, but that conviction need not be false.” Applied to the Resurrection of Jesus Christ, skeptics often portray it as a myth (i.e. a false belief of what happened), but as C.S. Lewis stated, “Now the story of Christ is simply a true myth: a myth working on us in the same way as the others. But with this tremendous difference that it really happened.” This chapter also includes a helpful critique of the nonsensical claims that the life of Jesus was simply copied from pagan gods like Horus and Mithras.

Finally, Carolyn Hansen’s chapter critiques the claims of Gerd Ludemann, professor of New Testament and early Christianity at the University of Gottingen. Ludemann denies the physical resurrection of Jesus, and he even claims that the early disciples did not mean that Christ rose bodily. Instead, Ludemann argues that Christ’s followers were so distraught after the Crucifixion that they had profound visions of Jesus “living” after His death, which sparked the Christian movement. Hansen demonstrates that Ludemann is guilty of imposing a modern naturalistic philosophy onto the first century Semitic culture that was intensely tactile and viewed God as being active in time and space. The disciples could recognize the differences between trauma-induced visions and a bodily resurrection. If any first century group might be given to spiritualizing important teachings, it would have been the Sadducees. However, Paul was trained as a Pharisee and already had a set belief about a resurrection of individuals at the end of time. Every New Testament author was a supernaturalist, so it does not work to impose an antisupernaturalistic grid on their writings to discern what they really meant.

The Resurrection Fact: Responding to Modern Critics is a wonderful addition to the many excellent resources on the Resurrection of Jesus. I appreciate the degree of scholarship demonstrated throughout, and I think the format will be very helpful in that each chapter focuses on the various claims of leading Resurrection deniers. It will serve as a helpful resource for many years as the same oft-refuted views promoted by modern skeptics will inevitably be brought up again and again.

Christians can be absolutely confident that Jesus Christ did rise from the dead, just as Scripture states. No amount of philosophical argumentation will be able to overturn the fact of the Resurrection.