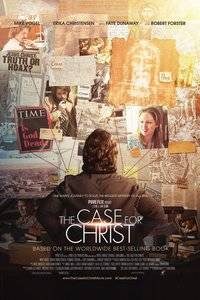 The Case for Christ is an excellent film about Lee Strobel’s journey from atheism to Christianity.

Earlier this week I had the opportunity to watch The Case for Christ at a local theater with my wife. Since the movie addresses many of the subjects that I write and speak about on a regular basis, I wanted to share some of my thoughts about it. There are a few minor spoilers here, although they aren’t spoilers if you already know the true story behind the film.

The movie tells the story of Lee Strobel and his journey from atheism to Christianity. Based on his book by the same title, the film highlights Strobel’s investigation into the central claims of Christianity—Jesus died on the Cross and was seen alive again three days later because He rose from the dead.

The movie really is well done. Christian films are often maligned for their level of quality, but I don’t think this would be a valid criticism of this film. The acting and storytelling is very good. It really feels like 1980, and viewers get a good look inside the Chicago Tribune newsroom where Strobel was an award-winning journalist.

Strobel’s testimony is well documented. After his wife Leslie converted to Christianity, he set out to prove that Christianity was false. In the film, he asks a coworker where he should start in his effort to debunk the faith. The coworker was a Christian and challenged him to go for the jugular—disprove the Resurrection and Christianity crumbles. So that’s what Strobel focused his efforts on.

The investigative reporter interviewed experts in various disciplines trying to punch holes in the Resurrection narratives. Were the manuscripts reliable? Did Jesus really die on the Cross? Were the disciples just hallucinating when they saw Jesus alive again? Is there credible evidence for Jesus outside of early Christian sources? The answers to these questions and many others shook Strobel’s atheism to its core.

In the beginning of his book, The Case for Christ, Strobel tells the story of James Dixon, a man convicted of shooting a police officer in the stomach during a scuffle. Everyone knew Dixon was guilty, all the evidence presented at the trial pointed to that fact, and Dixon even admitted that he did it. Yet, one piece of evidence was missing, and it was that one bit that changed everything and led to Dixon’s acquittal. This story is woven throughout the film and serves as an analogy for the way evidence is often viewed from a skewed perspective based on one’s starting point.

The film also shows the difficulties Lee and Leslie faced as they started growing apart. As Lee became more and more frustrated with his wife’s newfound faith, he became more determined to disprove it. Eventually, he realized that he couldn’t debunk Christianity, but he still didn’t want to convert.

His testimony highlights the fact that oftentimes the rejection of Christianity is not due to a lack of evidence. In an interview, Strobel said that there is often an emotional underpinning to one’s atheism. In his case, it stemmed from a very difficult relationship with his father, and he cited many other similar stories. He added that there are often moral issues at play. He didn’t want to change his lifestyle—he enjoyed getting drunk and didn’t want to give that up.

Eventually, Strobel gave his life to the Lord, and the film shows this in a dramatic scene with his wife. He told her that her faith was based on solid facts, and that he had come to accept that it was true. But he also told her that it wasn’t only the facts that persuaded him; his wife’s changed life played a major role in Strobel placing his faith in Jesus Christ. This scene shows how God reaches people in a variety of ways. For some, like Strobel, God uses the evidence for Christianity to bring them to the Christ.

Lee Strobel is now a very well-known Christian apologist. He is the author of numerous books dedicated to demonstrating the truth of Christianity, including The Case for Christ and The Case for the Real Jesus (both of which I highly recommend). He is an excellent writer so the books are engaging and easy to read.

I truly enjoyed the film, and it wasn’t just because he drove a Camaro (which is what I drive), although that was very cool. At times, it seemed like I was listening to my own Resurrection presentation on the big screen. It was interesting to see how one of my professors, Dr. Gary Habermas, was portrayed. That scene demonstrated the only “shortcoming” of the film I found, although I think shortcoming is too strong of a term. In Strobel’s encounter with Dr. Habermas, the professor tells him about the death of his first wife, Debbie. But Debbie died in 1995, 15 years after the scene takes place in the movie. Strobel did interview Dr. Habermas after 1995, and that interview makes up one of the chapters in his book. So the film took that particular detail and stuck it in 1980. It works well for the film, but it isn’t technically accurate. In the interview mentioned earlier, Strobel estimated that 15–20% of the movie doesn’t line up with his life in exact detail, but for the purpose of the script, certain details, like this one, were tweaked a little to make for a more compelling film.

I highly recommend this movie. For Christians, The Case for Christ is a wonderful film that will encourage you and demonstrate that the foundation of our faith, the Crucifixion and Resurrection of Jesus Christ, can withstand skeptical scrutiny and historical examination. For unbelievers, I urge you to see this film as well and undertake your own investigation of these events.