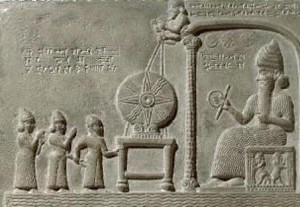 Because the figure on the right on the Tablet of Shamash is so much larger than the other people, some have claimed this tablet to be evidence of giants (Nephilim), but this is highly unlikely given the translation of the tablet.

[As of 11/5/11 my thesis is now available in print or for Amazon Kindle.] In the last two posts on this subject, I briefly summarized my thesis and then went on to explain why the liberal view and the Sethite view fail to make sense of Genesis 6:1–4. In today’s post, I want to examine the Royalty view to see how well it handles the text.

I must confess that at the outset of my paper I had very little respect for this position. I didn’t think it should even be considered as a plausible position. But as a result of my research, I believe this theory makes far more sense than the Sethite view, but still falls short.

I’ll explain the Royalty view shortly but it is important to read the text of Genesis 6:1–4 again.

The Royalty position proposes that the “sons of God” were kings or noblemen who viewed themselves as gods. These kings took wives from among the commoners and brought them into their harems. Their offspring were the Nephilim, “mighty men who were of old, men of renown.” A spin-off of this view states that the “sons of God” were polygamous tyrants from the line of Cain who took women and forced them into marriages (note that the last descendant of Cain listed in Genesis 4 is Lamech, who is described as a bigamist). Proponents of this view often believe Genesis 6 should be understood primarily as a polemic against the pagan nations surrounding Israel who viewed their kings as divine.

Let’s first look at the strengths of this position. First, the term “sons of God” in Hebrew is bene ha ‘elohim. The word ‘elohim is often translated as God, but it can also be translated as gods, judges, or sometimes rulers. So there is some basis for viewing the sons of God as rulers, or at least, the sons of rulers.

Second, several individuals in Scripture are referred to as “mighty men” (gibborim), such as Gideon and Nimrod. Nimrod is often cited in support of this view because he is described as a king in Genesis 10:8–10, so there is support for kings and their offspring being considered “mighty men.”

Finally, there are some examples in the Ancient Near East in which certain kings viewed themselves as divine. Also, Isaiah 14 (written 700 years after Moses) speaks of the king of Babylon and mentions his desire to be higher than God (many Christians believe portions of this chapter also refer to the fall of Satan). Psalm 45:6 states, “Your throne O God [‘elohim] is forever and ever.” While this psalm has Messianic overtones, the context makes it clear that king of Israel is described as ‘elohim. So even within Scripture there are statements in which the king views himself or is described as ‘elohim.

Despite these few strengths, the Royalty view has numerous problems. First and foremost, the only other places the specific term bene ha ‘elohim (“sons of God”) appears, it clearly refers to heavenly beings (see Job 1:6, 2:1, and 38:7). So although identifying the “sons of God” in Genesis 6 as sons of nobles is linguistically plausible, it is highly unlikely when we use Scripture to interpret Scripture.

Second, those who hold the Royalty view believe Genesis 6 was written primarily as a polemic against the pagan nations surrounding Israel. That is, these nations viewed their kings as gods, but Moses wrote this passage to show that they were merely men, possibly inspired by demons. The problem is that Genesis 6 can serve as a polemic, but only because it records real history. If Genesis 6 is myth, as some proponents of the Royalty view argue, then it cannot be an effective polemic because it simply puts one myth against another.

The idea that Genesis 6 is a polemic against the pagan nations must be read into the text. Many modern scholars have a penchant for reading Ancient Near Eastern concepts into Scripture. Although there is validity in understanding what was going on in the world when the various books of the Bible were written, there is a tendency among these scholars to automatically assume the biblical author(s) borrowed their ideas from these ancient peoples. This notion has been refuted time and time again. There is a possibility that Genesis was not originally written by Moses, but was instead compiled and edited by him based on earlier eyewitness records. This is known as the toledot theory. If accurate, this would mean that Genesis 6 may have been written by Noah or Seth, who certainly would not have been writing a polemic against pagan nations that would exist nearly a millennium later.

Third, this position does not truly account for the existence of the Nephilim. Yes, it’s possible to see how the sons of rulers could view themselves as “mighty men,” but the word Nephilim means “giants.” This word is not based on the Hebrew verb naphal, as so many think. Instead, it is an Aramaic word that means giants (more on this in a later article). So why would the sons of rulers be giants and why were they around again in Numbers 13:33?

Fourth, this position fails to explain the severity of the Flood judgment. While all sin must be dealt with harshly, the Bible specifies that this period of time involved severe wickedness and yet there is nothing inherently evil with a noble person marrying a commoner. In fact, this has gone on throughout history and just occurred in England a couple of months ago.

Fifth, although the phrase “they took wives for themselves” looks bad in English, as if the sons of God forced the women into marriages, that is not the case. Later in Genesis we read about Abram taking Sarai as his wife (10:29) and that Isaac took Rebekah as his wife (24:67). We know for certain that Isaac did not force Rebekah to marry him. She came to him willingly. After Sarai (Sarah) died, Abraham took Keturah as his wife. The wording used in these passages for taking a wife is the same. So there is no reason to assume the women involved in these marriages were forced into them.

Several commentators have written against the Royalty position. Based on some of the reasons above, Keil and Delitzsch stated that the Royalty view “may be dismissed at once as not warranted by the usages of the language, and as altogether unscriptural.” (Keil and Delitzsch, The Pentateuch: Three Volumes in One, p. 131.

The view that interprets the “sons of God” solely as powerful rulers does not, in my opinion, make enough use of the literary connections with pagan literature. The expression “sons of god,” when taken in context of these verses and when viewed against the background of the ancient Near East, suggests that more than powerful rulers are involved. Moreover, the expression in the Bible refers to angels (see, e.g., Job 1:6). Allen Ross, Genesis: Creation and Blessing, 182.

The Royalty position does a much better job with explaining certain features of the text than the Sethite position, which has very little textual support, but it has its problems. It relies heavily on Ancient Near Eastern writings, and yet there is a strong possibility that this portion of Genesis was written long before those writings ever existed. And even if Moses was the original author, there are still many other problems with the Royalty view, such as the fact that many of the surrounding cultures had stories about “gods” (or angels) mating with women whose offspring were demigods. So why wouldn’t those who depend the Ancient Near Eastern writings hold to the Fallen Angel view? I think the reason is that they are much like those who came up with the Royalty view in the first place. The position was developed by Jewish allegorists in the 2nd century AD in an effort to explain away the implications of the most obvious interpretation: the “sons of God” were heavenly beings and the Nephilim were their offspring.

This idea will be examined over the course of several posts. While it is disturbing and there are many objections to it, the Fallen Angel position has by far the most textual support and was the dominant view until the time of Augustine.