↓
Home Menu ↓
Skip to primary content
Skip to secondary content
Home→Apologetics→Q & A Series: Why Are Many Atheists So Afraid of Creationists?

This question will undoubtedly be mocked by many atheists and skeptics, but this only supports the point I want to make in this post. As many readers of this blog know, I work at Answers in Genesis so I routinely hear about some of the numerous attacks upon that ministry (and other creationists ministries) from some very vocal atheists and skeptics. They ridicule and mock us for our beliefs, but why do they do this?

Think about this for a few minutes. Atheism is a belief system that has absolutely no arguments going for it. The two most popular “proofs” of atheism do not actually support or prove it at all. Let’s look briefly at these two “proofs” for this godless belief system.

The first major argument used by many atheists to support their view is evolution. Besides the fact that evolution (in the molecules-to-man sense where one kind of animal evolves into another kind) has never been observed and we know that it cannot happen, atheists tout this so-called science to promote their view. Evolution supposedly happened in the past and therefore is not qualified to be part of operational science (like chemistry, physics, etc.). Instead, it falls under the category of “historical science” wherein the researcher makes educated guesses about the past. Now, the best place to learn about our history is from a reliable historical record, which is exactly what Christians have in the Bible. But the evolutionist does not have a written record of past events to support their view. Instead, they must interpret data from rock layers, the solar system, etc., and make educated guess (based on the false philosophy of uniformitarianism) about what they think happened in the past. (Note: it is unlikely that an evolutionist will ever acknowledge the two different kinds of science mentioned, because as soon as they grant that point, they lose the debate.)

Now we could debate all day long about whether they are right or wrong, but here’s my point. Even if evolution could be shown to be true (which it can’t), it doesn’t prove atheism at all. It certainly doesn’t match what the Bible teaches, but there are millions of people who believe in some form of theistic evolution. That is, they believe God or a god used evolutionary processes to create this world. So as it turns out, evolution doesn’t prove atheism. It is simply used in an effort to attack Christianity (and, at times, some other faiths), which is really the agenda of many of these skeptics and atheists in the first place.

The second greatest “proof” of atheism is the so-called problem of evil. Bible-believing Christians have the answer to this question. In fact, we are the only ones who can answer this problem appropriately, as I demonstrate in my book, God and Cancer: Finding Hope in the Midst of Life’s Trials.

But here is the problem for the atheist. If they are right that God does not exist, then who defines what is good or evil? For the atheist, there really is no such thing as good or evil, since everything just is. It is neither good or bad, right or wrong, good or evil. It just exists. Furthermore, everyone (or each society) gets to decide right or wrong for himself. So what may be viewed as evil by one atheist may be seen as good by another. Worse yet, if atheism were true, then we would simply be a collection of chemicals that, by a blind stroke of luck, came together in just the right way. But if that is true, then our decisions are actually not decisions at all. They are determined by the chemical reactions in our brains and man has no free will.

So, if the atheist were to be consistent, they would stop trying to convince others that Christianity is wrong. After all, if atheism were true, then man has no free will, and Christians would be Christians because they have to be. That’s what the chemical reactions in our brains have forced us to be.

If you think about it, a person who is really an atheist should have a “live and let live” mentality toward others, since each person gets to decide truth for himself or herself. There are some atheists out there who are friendly, like S. E. Cupp. But the so-called New Atheists, like Richard Dawkins, Christopher Hitchens, P.Z. Myers, and their ilk are very aggressive in promoting their agenda, which often includes mocking Christians, especially those who believe the creation account in Genesis. See my earlier article entitled “Leading Atheists Display Their Bias” for another example of their hypocrisy. 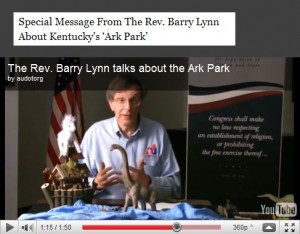 The "Reverend" Barry Lynn repeatedly lies about the Ark Encounter project in Kentucky and irreverently mocks Christianity and the Bible. Is this sort of behavior consistent with being a reverend?

Recently, the “Reverend” Barry Lynn from Americans United for the Separation of Church and State, posted a video in which he appeals for funding so they can continue their “education and legal programs.” Here is a link to another blog which shows the video and critiques it. Yet throughout the video Lynn repeatedly lies about the biblical account of the Ark and the upcoming Ark Encounter project. He knows full well that tax payers are not funding the Ark project, yet he continues to irreverently lie through his teeth about it. This is the same guy whose group filed a lawsuit to stop ministries from sharing the Gospel in certain prisons. What kind of “reverend” would sue to stop people from sharing the Gospel? Barry Lynn is a wolf in sheep’s clothing (see Matthew 7:15). I don’t know if he thinks he is actually an atheist, but he seems to always agree with atheists against Christianity. So if the shoe fits…

Why do people like Barry Lynn resort to mockery and lies? If they are the ones that supposedly have the truth on their side, then why are they so afraid to let the public hear the facts? Many of these people are the same ones who filed lawsuits in their vain efforts to keep the Creation Museum from being built in Kentucky. Since nearly every major U.S. city has publicly funded museums touting their evolutionary religion, why are they so afraid of one privately funded Creation Museum? Why is Barry Lynn so determined to lie about the Ark Encounter project, not only in this appeal for funding video, but he also lied about it in a debate with Ken Ham on Anderson Cooper’s show on CNN.

The answer is obvious. Barry Lynn and the New Atheists know the truth. Deep down, they know God exists. That’s why they spend so much time railing against Him. If they truly believed He wasn’t real, then they wouldn’t worry so much about Him. They are trying desperately to justify their professed unbelief. They are suppressing the truth in unrighteousness, just like Romans 1:18 talks about. And, just like Romans 1:22 states, “Professing to be wise, they became fools.” Psalm 14:1 is also clear, “The fool has said in his heart, ‘There is no God.'” That is what the Bible says about people who deny God, because they are rejecting what they know to be true.

Christians need to pray for these people and help others who buy into their nonsense to see the truth. We also need to trust God from the very beginning of His Word, speak the truth in love, and model godly behavior in an ungodly world. Let’s make sure that if the atheist is going to reject God, it is because the message of the Cross offends them (1 Corinthians 1:18), not the messenger.