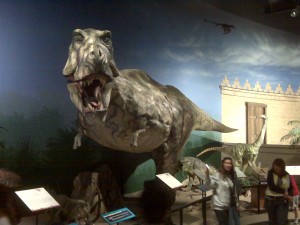 It seems that many atheists are more afraid of the Creation Museum than they would be of a live T-Rex. What are they so afraid of?

The Budget Travel website recently started a contest asking people to vote on the top 15 places that kids should see before they turn 15. The Creation Museum started well. When I first saw the site, it was ranked first with about 640 votes and about 80 positive comments. Well, word got out to popular atheist PZ Myers and on Wednesday morning (2/15/12), he encouraged his blog readers to visit the site and start voting on this “awful poll” for any tourist attraction that had a chance of beating the Creation Museum (which had slipped to #2 by the time he posted). His readers (one person called them the PZombies) immediately followed his advice and started voting.

I don’t have a problem with anyone voting in the poll. They have every right to do it, and there are some fabulous places that a person can vote for in addition to the Creation Museum. However, it’s the behavior of many of these atheists that is so enlightening. As I am typing this, there are eleven fake names that have been added to mock the Creation Museum, such as the Creation Tower of Jesus, Creationism & Fairy Tales Museum, and the Creation Museum of Child Indoctrination Anti-Intellectualism.

Those fake names are the least of my concerns, although they show the immaturity of some of these atheists (for the record, I don’t believe PZ Myers encouraged his readers to add these to the list). What is far worse are the numerous comments that have been added to the Creation Museum’s link for voting. Over 500 comments have been made about the Creation Museum, but by my count, no more than 13 comments exist for any other place. The first 50 or so comments were overwhelmingly positive for the museum. That was until the atheists arrived. It’s certainly okay for people to express their opinions, so I’m not calling on anyone to ban these folks from the site. I want to use this as an example to point out their utter hypocrisy and their irrational fear of biblical creationists.

About 400 of the comments are extremely negative. Many of them repeat the same tired lines about how teaching children creationism is child abuse, how believing in creationism is like believing in a flat earth, or comparing it to fantasy like Disney World. Some were flat out lies, such as the one claiming that the museum has live actors playing Adam and Eve in the nude, or that a triceratops with a saddle is part of the exhibit as proof of creationism (the dino with saddle is there for a fun photo for kids 12 and under, not that that has stopped atheists from jumping on it and posting their pictures online to mock the museum). However, there are some that are far worse. Some of the comments are absolutely blasphemous as certain people used God’s name or Jesus’ name as their own while leaving vulgar remarks. Others wished that terrorists would fly planes into the museum. There are many others that do not need to be recounted here, but these are enough to make my point.

Why do these atheists care so much about one privately funded museum that bases its teachings on the Bible when they have hundreds of publicly funded museums around the country promoting their religion of evolution? It’s somewhat humorous that these atheists are so offended by a God that they claim doesn’t exist. Why be offended by something or Someone that you don’t think exists? I’m not offended by pink unicorns, and if someone wants to believe in them, then they have that freedom.

If the atheist were to be consistent with his beliefs, then he wouldn’t care what others believed, because we would all be products of random chance processes; therefore our thoughts would merely be caused by random interactions of chemicals in our brains. As such, man would have no free will, no ability to think for himself (so much for the “free thinker” title atheists so often give themselves), and no reason to be upset at anyone for holding a different view. I have elaborated on this point in an earlier post about atheists being afraid of creationists so I won’t belabor it here.

Also, why must so many atheists resort to outright lies and mockery in trying to shout down the Creation Museum? Some might claim that they do it for fun or to protect people from being deceived by biblical teaching (nevermind the fact that if evolution were true, there would be no such thing as morality and so no reason to worry about deception).

The real answer to this question is found in the Bible. 2 Peter 3 makes it very clear that in the last days scoffers would come along, following their own lusts, and they would cling to a philosophy that says, “all things continue as they were from the beginning” (2 Peter 3:4). This is a perfect description of uniformitarianism, the philosophy that undergirds every old-earth/old-universe belief system. These scoffers would ridicule three specific prominent teachings in Scripture: Creation, the Flood, and the Second Coming of Christ. This is exactly what is taking place here. So in their zeal to ridicule Christians and God, these mockers are actually fulfilling the words of Scripture, thus providing even more confirmation that God’s Word is true.

Finally, the reason these atheists are so active in opposing the biblical God is because they know deep down that He exists, and they are desperately trying to justify their unbelief. They don’t exhibit the same sort of animosity toward any other deity. It is the God of the Bible that they hate, because they know that He is their Creator and will be their Judge. Rather than swallowing their pride and humbly bowing before the One who made them, these people decide to follow their own passions and lusts and shake their fists at the One who sent His Son to die for our sins. How tragic it will be for these people when they meet their Maker!

While they may not actually be cowering in fear of the Creation Museum, they would do well to heed the Lord’s words when He said, “And do not fear those who kill the body but cannot kill the soul. But rather fear Him who is able to destroy both soul and body in hell” (Matthew 10:28, NKJV). We all need to fear God rather than men.

In my previous post on this subject, I concluded with these words, which I think are a fitting ending to this post:

Christians need to pray for these people and help others who buy into their nonsense to see the truth. We also need to trust God from the very beginning of His Word, speak the truth in love, and model godly behavior in an ungodly world. Let’s make sure that if the atheist is going to reject God, it is because the message of the Cross offends them (1 Corinthians 1:18), not the messenger.