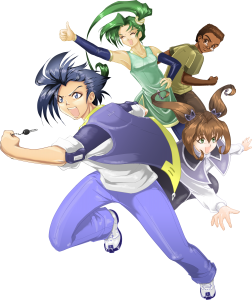 Jax, Izzy, JT, and Micky will soon be back for three more fun adventures designed to teach the truth of the biblical worldview.

It’s been about a month since I’ve posted any new content to this blog. Hopefully, none of you were holding your breath for the next post. This doesn’t mean that I haven’t been busy writing.

We are currently putting the finishing touches on the fourth book in The Truth Chronicles series, which is entitled The Thief. I don’t want to give away too many details, but the story takes place nearly a year after the first three books, so Jax and his friends are now juniors at Silicon Valley Prep. Once again, much of the story revolves around the upcoming science fair and both groups have a great shot at winning it. Readers will enjoy the light-hearted banter between the main characters and their care for each other as they continue to learn more about God and His world. There will be some new characters, lots of adventure, important issues addressed, and a good amount of mystery in this installment, which is due out in early March.

We’re also getting close to finishing up the rough draft for book five in the series, and are hoping to have it and the sixth one released by the time summer rolls around. Just like the first three books in the series, these three books will have a nice blend of action, time-traveling adventure, and apologetics. As always, the teaching aspect flows naturally in their discussions and fits in well with the plot, so the reader doesn’t feel as if they are being preached to. Instead, they are learning from our fictional characters how they might be able to put into use the things they’re learning in real-life conversations.

If you are unfamiliar with the series, please check out this post and this one for more details. It has been our goal to explain the biblical worldview, especially as it relates to the creation/evolution debate, to junior high and young high school students. We’ve enjoyed receiving feedback from young people who have learned how to defend their faith, witness to their friends, and had a lot of fun while reading these books. We’re excited to see share books 4–6 with our readers.

If you’d like to keep up to date with the progress on the next three books in The Truth Chronicles series, then please “like” our facebook page. We’ll occasionally post some fun facts about the series and a few more surprises along the way.