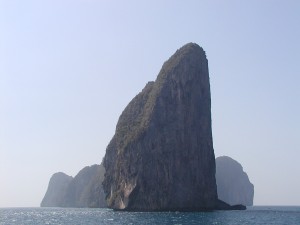 Like this giant rock, we must take a firm stand.

The sermon at church this morning focused on the lives of two important figures from the Old Testament: Jehoiada and Joash. Here’s a little background information from 2 Chronicles 22 -24.
Jehoiada was an Israelite priest and a godly man. Joash was the only male child who survived Queen Athaliah’s attempt to wipe out all the royal heirs so she could take the throne. (Had she succeeded, God’s promise to David would have failed.) Jehoiada and his wife hid young Joash for six years. At the age of seven, Joash became king over Judah and he reigned for forty years.
Joash is often remembered as a good king, but this is hardly an accurate depiction. While Jehoiada the priest lived, Joash was a good king and served the Lord. He made wise decisions and restored worship in the temple. However, upon Jehoiada’s death, Joash’s true nature became known.
Almost immediately, Joash followed the advice of godless men and allowed the people to fall into idolatry. He took no action against the wicked men who killed a prophet named Zechariah, the son (or grandson) of Jehoiada – the man who risked his own life to save Joash’s life and to install him as king.
The problem is that Joash was just a follower. He lacked the backbone necessary to stand up and do what was right no matter what the cost. As long as Jehoiada was around, Joash followed him and did what was right. But as soon as Jehoiada died, Joash followed godles men.
In many ways, we see this same mentality reflected in the lives of young people today. I have seen far too many teens living out their parents’ faith. As long as they live under their parents’ roof, they walk and talk like Christians. But as soon as they are out on their own, they chase after the godless things of this world. Of course, young people aren’t the only ones susceptible to following after godlessness; adults stumble and fall too.
So what is the solution? First, like Paul told the Corinthians, we need to be sure that we truly are believers in Jesus Christ (2 Corinthians 13:5). Second, we need to take a bold stand against the false philosophies, worldly practices, and all the other wiles of the enemy (Ephesisans 6:10-13). We must have the conviction to do what is right no matter what the cost. We have to be willing to draw the proverbial line in the sand, and say, “No!” to the things that we know are wrong. We must make that commitment now rather than waiting for a difficult temptation to come along.
Moreover, rather than always reacting to what the world does, we must take some proactive steps so that we are prepared to stand firm. Paul also told the Ephesians to be “filled with the Spirit” (Ephesians 5:18). Well, what does that mean? There is a parallel passage in Colossians 3:16, but this time Paul wrote that they should “let the word of Christ dwell in you richly.” That’s what it means to be filled with the Spirit. We must fill our lives with God’s Word. We must read it, study it, pray about it, and meditate on it day and night.
Our music, movies, entertainment, and other leisure activities should draw us closer to God rather than fill our minds with the trash of this world. Our conversations and our thoughts should reflect our desire to be like Christ rather than like the world. We must be sure of our faith and then stand firm in it. Only then will we be prepared to stand against the attacks that will come our way. It will all be worth it because one day when true believers will hear our Savior say, “Well done, good and faithful servant…enter into the joy of your Lord” (Matthew 25:21).