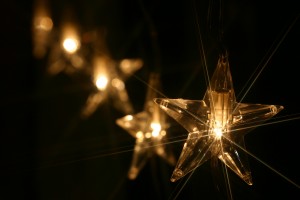 This series was started because of a talk that I’ve given in the past on misconceptions that people have about the Bible. There are so many ideas that people think are found in the Bible that really are not. Nowhere are more of these wrong ideas found than in the accounts of Jesus’ birth found in Matthew and Luke.

The more I study this issue, the more misconceptions I find and the more upset some people become. I have been accused of “slicing and dicing Scripture” and called a liberal (in a theological sense, which is about as far away from my beliefs as one could possibly get). Obviously, some people don’t like to have their traditions challenged, but the point of these articles is to lead you to take a close look at the text rather than simply repeating what so many have taught. So let’s take a look at a few more of these misconceptions.

Umm…How would you know? This rather strange idea is popularized in the song Away in a Manger—”…the little Lord Jesus no crying he makes….” I don’t know if the writer of this  song intended to convey that Jesus never cried as a baby or that He was simply resting quietly at the moment discussed in the song, but some people have gotten the wrong idea and claimed that He never cried as a baby.

Well, He cried as an adult (John 11:35) at the funeral of His friend Lazarus, which He subsequently ended by raising his friend from the dead. Why wouldn’t He cry as a baby? Not only was He fully God, He was fully human too. As such, how else would He express His hunger or need to be changed? There really is no support for the idea that He didn’t cry, and there’s no reason that He wouldn’t have done it.

It doesn’t take long to find people who dogmatically assert one of these two claims. But the simple fact of the matter is that we do not and cannot know this with the information available to us today.

It seems that the first link to the date December 25 was made by Julius Africanus in the early part of the third century. So nearly 200 years after the Resurrection, someone chose December 25 as the birthday for Jesus. How would Julius know? He wouldn’t, but he did have a reason for selecting that date. He believed that Jesus was conceived during the vernal (spring) equinox (March 25 of the Roman calendar), which was also held by some to be the date of Creation. So add nine months that that and you have a birthday of December 25. Of course, there is no way to know if He was conceived on that date or if Mary was pregnant for precisely nine months.

Others have claimed that it could not have been on December 25 for various reasons. One argument is that the shepherds would not have been out in their fields on a winter night. This sounds good to those of us who have grown up in colder climates, but the average night time temperature in that part of Israel is in the upper 30s. While this is a bit chilly, it is certainly bearable. It’s also possible that the night Jesus was born was a warmer than average night. So this argument has problems.

Some have made a more elaborate claim based on the fact that Zacharias (the father of John the Baptist) was a priest in the order of Abijah (Luke 1:5). 1 Chronicles 24:10 states that the order of Abijah would be the eighth division to serve in the Temple. As such, we can calculate when Zacharias served. From this, it is assumed that his wife Elizabeth conceived immediately after his time of service, that Mary conceived exactly six months later, and that she had a normal-length pregnancy.

In reality, none of these things can be known with any certainty. We cannot figure out exactly when the order of Abijah served at that time. The Temple was out of commission for roughly 70 years during the Babylonian captivity and again for a few years due to the desecration of Antiochus IV Epiphanes. Also, when the Jews returned after their captivity, they did not have all of the divisions of priests right away. In Ezra and Nehemiah, various lists are given of these divisions. In one, Abijah is not even listed, while it appears as 11th, 12th, and 17th in the others. Also, we simply cannot know the other factors listed above.

Finally, some have claimed that Jesus was born at the Feast of Tabernacles, which was celebrated during the fall (September-October). Some have a desire to interpret all of the major events in Christ’s life as occurring on a particular Jewish festival, but this is reading into the text ideas that are not there. Yes, the Crucifixion occurred on or near the Passover and so His Resurrection would have been on or near the Feast of Firstfruits shortly afterward. However, the Bible does not tell us that His birth, the Rapture, and the Second Coming have or will occur on major Jewish festivals, as some have claimed.

The fact is, we do not have enough information to either rule out or pinpoint any date as the actual day that Christ was born. The majority of Christians choose to celebrate His birth on December 25 and that is just fine with me. But this brings up another argument.

Claim: Christmas Is a Pagan Holiday so Christians Shouldn’t Celebrate It

It is true that many of the traditions associated with Christmas have absolutely nothing to do with the birth of the Son of God. The birth of Christ is not about Santa Claus, reindeer, Frosty the Snowman, or any of these other things so popular in our culture. If a Christian chooses to celebrate, then their focus should be on the birth of Christ rather than these things.

Some allege that the date of December 25 was borrowed from the pagan holiday Saturnalia or from another one called Sol Invictus. Even if this was the case, it wouldn’t really matter if Christians decided to praise God for sending His Son into the world on that day. Read Colossians 2:16 and Romans 14:3–6. We have the freedom to celebrate on any day we choose.

Was December 25 borrowed from these pagan holidays? Saturnalia was a week-long celebration from December 17–23 and got its start in 217 BC. Julius Africanus selected December 25 in his work Chronographia written around AD 221, so perhaps he chose that date to co-opt the pagan holiday. Sol Invictus was celebrated on December 25 to celebrate the Roman sun god, but it was started by Aurelian in AD 274—53 years after Julius selected that date!

Some have rightly pointed out that Christmas comes from the words “Christ” and “Mass.” This is troublesome for many Protestants who disagree with Roman Catholicism about the mass. I have extremely strong objections to the Catholic mass (Christ does not need to be re-presented or re-sacrificed on a regular basis. His sacrifice was once for all (Hebrews 7:27) and He even stated, “It is finished” while on the Cross (John 19:30)). However, Protestants do not celebrate the mass on the day called Christmas. So perhaps we could come up with a better name for the day on which we celebrate the birth of Christ, but calling it Christmas does not mean one takes part in the Catholic practice.

There are so many things that Christians can focus on or by which they can be distracted. It is a good idea to learn the history and background of the traditions that one celebrates. However, we need to make sure that our beliefs and practices are firmly rooted in and consistent with Scripture. At the same time, Christians need to recognize the amount of grace and mercy given to them by the Lord, and show some of that same grace and mercy to others who don’t share their convictions about such traditions.

Although the Bible does not command us to celebrate or commemorate the birth of Christ, we have the freedom to do it on any day we choose. In fact, we should thank God every day for sending His Son to this earth, because without the Incarnation of the Son of God, there would be no Crucifixion and Resurrection. And without Christ’s sacrifice and conquering of the grave, we would still be in our sins and destined for an eternity apart from God. So take time today to praise God for the greatest gift that has ever been given: Jesus Christ.