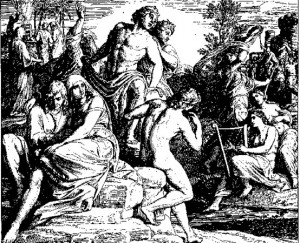 This old woodcut depicting events in Genesis 6 is entitled "The Sons of God Marry Daughters of Men." It is from http://www.all-art.org/history1-bible2-2.html.

[As of 11/5/11 my thesis is now available in print or for Amazon Kindle.] Since I started to write blog posts about this subject, I have covered the following topics: a summary of my thesis on the sons of God and the Nephilim, a critique of the Sethite view, a critique of the Royalty view, a summary of some of the biblical arguments for the Fallen Angel view, as well as some of the theological and historical arguments favoring the Fallen Angel view. Now it is time to respond to some of the critiques of the Fallen Angel view to see if it can stand up to scrutiny. If you have an objection that is not listed below, feel free to leave it as a comment and I’ll address it in a timely manner.

The most common argument against the Fallen Angel position is that Jesus claimed angels could not marry. This is based on Matthew 22:30 where Jesus said that in the resurrection, people will “neither marry nor are given in marriage, but are like angels of God in heaven.”

There are several responses that can me made here. First, Jesus may have been speaking about the normal activities of angels while Genesis 6 explains a unique event. Second, Jesus spoke about the angels in heaven, meaning that He was talking about godly angels rather than fallen angels. Jude 6 seems to reference these fallen angels and states that they abandoned their proper abode, so they may not have been in heaven. Jesus’ words could also mean that angels did not marry in heaven, but do not address what they could do on earth. He didn’t say that angels could not marry, but that they do not marry.

Another common objection is that Genesis 6:1–4 seems to be a prelude to the description of man’s wickedness just prior to the Flood. Since the Flood served to destroy all air-breathing, land-dwelling creatures except for those on board the Ark, some have argued that it would be unfair to punish mankind for the sins of certain angels.

Once again, there are several responses that can be made. First, Genesis 6:2 does not portray the women as innocent victims. They were also complicit in the sin of these illicit unions so it would not be unfair for them to be judged. Second, Genesis 6:5 describes the tremendous wickedness of man on earth at that time and the following verses explain that mankind and the land animals would be wiped out because of man’s sin, so this objection is unfounded. Finally, Jude 6, 1 Peter 3:19–20, and 2 Peter 2:4 all discuss the fact that God imprisoned certain angels who sinned in Noah’s time (1 Peter specifically states that they sinned in Noah’s day whereas Jude and 2 Peter talk about this imprisonment in the context of Noah’s day). So the Bible does describe the punishment of these angels.

Some have claimed that fallen angels are incapable of materializing so it would be impossible for them to engage in physical relationships with women. Hank Hanegraaff went so far as to say that if fallen angels could take human form then we “lose epistemic warrant for the central event in the Christian faith.” In other words, we wouldn’t have any physical evidence for the Resurrection of Christ (presumably because demons could have just faked the Resurrection and deceived the disciples into thinking Christ had risen).

First of all, this is an argument from silence and may very well be wrong. We know holy angels can manifest in physical form and eat, drink, and grab someone (Lot) to pull him from a soon-to-be-destroyed city (Genesis 18–19). We also know that we are supposed to be careful to entertain strangers because some have unknowingly entertained angels (Hebrews 13:2). Why would we assume that fallen angels cannot materialize if they could have conceivably done so prior to falling?

Second, it is quite reasonable to infer from the accounts of the temptations of Christ provided in Matthew 4 and Luke 4 that Satan appeared before Jesus in physical form. Revelation 9 also describes what I believe is a future judgment in which creatures are released from “the bottomless pit” that are described as being like locusts. Many commentators, like John MacArthur, believe these are demonic beings who appear in physical form.

Third, concerning Hanegraaff’s claim that we “lose epistemic warrant” for the Resurrection, there is a simple response. We know that Satan and the other fallen angels cannot go beyond what God allows. For example, in Job 1–2 God restricted the calamities Satan could inflict on Job. So as long as God prevented fallen angels from faking the Resurrection, then there is nothing to fear. Furthermore, the Bible tells us that it really was Jesus who walked and talked with His disciples after He rose from the dead so we don’t need to worry that it might have been a demon.

Offspring (Nephilim) Could Not Be Saved

Some of the early church fathers believed that when Nephilim died, they could not go to heaven or hell since they were allegedly part-angel and part-human. As such, their spirits wandered the earth and were the demons described in the New Testament. The idea that God would allow sentient beings to be born with no possibility of salvation is troubling to some believers.

I would also be troubled by this notion, however, I believe there is a plausible solution to it and the Nephilim could have been saved. Although we don’t know the precise details of how fallen angels were able to produce offspring (whether they took on human form or simply manipulated human DNA in some way or something else) I believe the Nephilim were fully human. If they were, then they could have been saved if they would have repented of their sin and trusted in God.

But how could the offspring of fallen angels be considered human? Because they were born to women. Although the circumstances were entirely different and not sinful or sexual, Jesus Christ was conceived by the Holy Spirit in Mary and yet He was (and is) fully human (in addition to being fully God). So in His humanity, Jesus was the child of a human mother and a non-human Father. He needed to be fully human in order to be our Kinsman-Redeemer. We know that Jesus came as the Last Adam to save descendants of the first Adam, so only descendants of Adam can be saved. Since the Nephilim would have been born to human women, then they would have been descendants of Adam and therefore I think they could have been saved. Again, I do not want to draw too many parallels between the wicked activities of the “sons of God” and human women described in Genesis 6 and the sinless and miraculous conception of Christ in Mary.

Although there are some other less common objections, I do believe there are plausible solutions to each of them and can be overcome. The spin-off of the Fallen Angel view which proposes that the “sons of God” possessed men would also solve each of these objections. The other major views have serious textual problems, so I believe the Fallen Angel view is the best interpretation of this passage.

The next post will focus on the Nephilim and how they could have been around both before (Genesis 6:4) and after the Flood (Numbers 13:33).