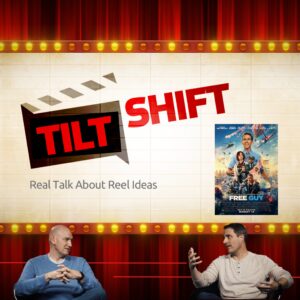 Are you ready for some Tilt Shift?

On Tuesday, August 30, my new show called Tilt Shift launched on the Answers.tv platform. In this show, Bryan Osborne and I watch clips from Hollywood films and discuss the various worldviews and philosophies being promoted, whether good or bad. This post will give a little background to the show and explain what viewers can expect in its first season.

Tilt shift is taken from the name of a special camera lens that allows photographers to alter the perspective compared to a normal lens, and it can also be used to create a unique effect that makes full-size objects seem like miniature models. In a sense, a tilt shift lens can help a photographer create an illusion of reality. In some ways, many films create an illusion of reality when they throw in errant philosophies.

Films are made for a number of reasons (entertain, thrill, scare, etc.), but a director’s or writer’s worldview will usually be inserted in some way. Sometimes, especially in recent years, these ideas are overtly shown, which means they can be easily spotted and are often dismissed because they are annoyingly in your face. However, when the ideas are subtly woven into the story, they are harder to detect, and yet they still influence the way we think and view our world. Of course, Hollywood is not generally teaching concepts that align with biblical principles, so believers who watch movies need to be equipped to spot these false ideas. But these films do occasionally promote biblical ideas (sometimes unwittingly), and we should highlight these as well, because they can be used as illustrations to help people understand biblical truths.

Some Christians choose to avoid many of our culture’s popular films. However, Hollywood significantly impacts our society, so we should at least familiarize ourselves with popular movies since they are often some of the most influential voices in our culture. The Apostle Paul did something similar. He was familiar with the entertainers and thinkers of his day and cited these pagan poets (Acts 17:28; Titus 1:12) to connect with his audience and direct them to the gospel message.

Our goal with Tilt Shift is to teach viewers how to “watch what you watch.” That is, we want to show them how to think critically about what they are watching, how to spot unbiblical ideas, and how they can use these films to point people to the gospel and better explain the Bible.

From Concept to Reality

My wife and I are kind of movie buffs. In fact, we met at a movie theater and have both worked at theaters back in the 90s. Early last year, we were watching a number of movie review/analysis shows on YouTube. Many of them were entertaining and covered a variety of angles, such as highlighting inconsistencies, analyzing story, or breaking down stunts and special effects. But none of them really analyzed the unbiblical ideas being pushed. Yes, there are websites like PluggedIn.com, that do a good job describing concerning elements of films, but I didn’t find anything like that on the popular YouTube shows.

We talked about how fun it would be to do something similar to these shows and discussed who would be the right cohost. We decided that Bryan would probably be a great cohost, so I called him and asked if he would be interested in doing the show with me. He thought it sounded fun, and within a few days, I had an opportunity to pitch the idea to our boss. He quickly gave us the green light because he knows how influential movies are and how important it is to engage our culture in this area. And we were right, Bryan turned out to be a great cohost, and we had a blast working on the show. 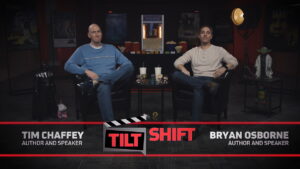 Here’s a still from our first episode. So fun. I’m looking forward to recording another season.

It took nearly a year to figure out where and when we could film the show, how the set would look, and what movies we would cover in the first season. Finally, everything fell into place. We recorded the show in March, and then had some work to do in post-production. It took a while to review the shows and think of additional brief clips from other films for humor or to drive home a point in a fun way. Casey spent a lot of time tracking these things down for us.

I need to say a huge “Thank you” to the awesome A/V team at Answers in Genesis who did an amazing job with the set, filming, editing, and everything else involved in bringing the show to fruition.

With thousands of movies to choose from, we decided our first episode would be an analysis of Free Guy starring Ryan Reynolds because there is a great analogy to how our worldview influences the way we view reality, and there is an overarching story that might sound very familiar to Christians.

A new episode will be released each Tuesday. Season one includes the following movies (not in order):

We’ve already received some very encouraging feedback and are making plans for another season. Head on over to Answers.tv and check out Tilt Shift. If you don’t have a subscription, you can get a free seven-day trial to watch the show and explore thousands of other videos. You can also subscribe for just over $3/month when you sign up for a year. After watching Tilt Shift, come back here and share your thoughts on the show and perhaps suggest ideas for future episodes in the comments section below.